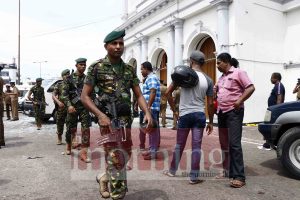 In the aftermath of Easter Sunday’s shocking terror attacks, there have been fresh moves by the United National Front (UNF) Government to enact the controversial Counter Terrorism Bill (CTB).

A week after the Easter Sunday attacks, Prime Minister Ranil Wickremesinghe, making a statement on Sunday (28), said that the anti-terrorism draft bill tabled in Parliament last year (2018) should be debated by the House and passed urgently.

This came about after the Government initially announced there were no provisions in the current Prevention of Terrorism Act (PTA) or any piece of legislation to ban foreign terrorist groups and that emergency laws would have to be implemented to do so.

“The Prevention of Terrorism Act of 1979 was only limited to terrorist acts in the country. Later, those in camps in South India had been included in the law. The second and third clauses clearly state that fact. We have acted according to the 1974 laws in England which only dealt with Northern Ireland terrorism,”the Prime Minister said.

The Prime Minister in his statement went on to say that the CTB had been brought to ensure that there were no loopholes in anti-terrorism legislation.

“In order to fill this gap, we have included facts in the anti-terrorism draft bill. The third clause of the bill says if any person threatens any ethnic group, illegally influences the Sri Lankan or a foreign government, or causes harm to the territorial integrity or sovereignty of Sri Lanka or any other sovereign country, then that person commits a crime in Sri Lanka,” the Premier said, adding that the failure to get these laws passed in Parliament prevented the arrest of these suspects before they could carry out these attacks.

“We presented this draft in Parliament in 2018. Now this draft is stuck in the relevant committee of the Parliament,” the Premier added.

Minister of Tourism Development, Wildlife, and Christian Religious Affairs John Amaratunga, speaking to The Sunday Morning, said that it was important to have the draft bill passed in Parliament as soon as possible.

“There is no time to waste. Measures must be taken to ensure that there is no repeat of what happened on Easter Sunday. The Counter Terrorism Bill must be brought in immediately,” Amaratunga said.

Opposition Parliamentarian TNA MP M.A. Sumanthiran, while admitting that there were some concerns about the bill that needed to be addressed, said that if such issues were resolved, the draft bill should be enacted as soon as possible.

“There are some concerns, such as the definition of terrorism in the proposed CTB that needs to be resolved. If done, then this bill should be made law at the earliest as the current Prevention of Terrorism Act (PTA) is not only draconian, but also contains no provisions to deal with foreign terrorists and modern forms of terrorist attacks,” Sumanthiran said.

A UNF parliamentarian, addressing a media briefing at Temple Trees on Tuesday (2), said that the Government was prepared to include the amendment proposed by the Opposition into the CTB.

However, staunch opponents of the bill were quick to slam the Government for its opportunism.

Law and Society Trust Senior Researcher Vidura Munasinghe charged that the Government was using the terrorist threat and the ensuing public fear to bring in a piece of legislation that was more draconian and undemocratic than the current PTA.

“The UNF Government very well knows that there is strong resistance to the enactment of the proposed CTB. Therefore, they’re using this attack to somehow bring in this undemocratic piece of legislation,” he said.

When questioned as to whether the proposed CTB contained the provisions pertaining to foreign terrorist organisations, Munasinghe said that the definition of terrorism was so broad that it defines trade unions and student unions as terrorist groups too.

“If the Government needs to ban a certain type of organisation, then it can bring in separate legislations. The proposed CTB is not the solution to this problem as it would also allow the Government to legally curtain economic and democratic rights of the masses,” Munasinghe said.

Article 3 (1) of the draft Counter Terrorism Bill states: “3. (1) Any person, who commits any act referred to in subsection (2), with the intention of – (a) intimidating a population; (b) wrongfully or unlawfully compelling the Government of Sri Lanka, or any other government, or an international organisation, to do or to abstain from doing any act; (c) preventing any such government from functioning; or (d) causing harm to the territorial integrity or sovereignty of Sri Lanka or any other sovereign country, shall be guilty of the offence of terrorism.”

Munasinghe asserted that the motives of the CTB go beyond that of countering terrorism.

JVP stalwart Wasantha Samarasinghe alleged that the Government who had criticised the PTA was attempting introduce a piece of legislation that is far worse.

“The CTB was proposed to replace the PTA but as it turns out, the CTB is worse than the PTA. According to the draft bill, any gathering of more than two people could be defined as a terrorist group,” he said.

He went on to say that this was nothing more than the Government trying to achieve two goals in one swoop.

“The Government wants to show the masses that they’re proactive in combating terrorism by enacting this bill as well as enacting a bill that is highly controversial and undemocratic. They are trying to kill two birds with one stone,” Samarasinghe said, while going on to say that the CTB must not be enacted and that the JVP would do everything in its power to ensure it isn’t.

“Joint Opposition” MP Dinesh Gunawardena, too was highly critical of the draft CTB and the Government’s attempts to enact it.

“The CTB has been condemned by all for its definition of terrorism,” he said.

Gunawardena said that existing laws were sufficient to face and tackle terrorist threats to the nation.

“The law of the land has the necessary powers with the addition of emergency regulations and the PTA. There is no need to bring in the CTB,” he said.

At present, the draft CTB is before the Parliamentary Sectoral Oversight Committee on International Relations where various provisions of the draft bill are being deliberated.

September 15, 2019 byPubudu Chinthaka No Comments
The Sri Lanka Freedom Party (SLFP) yesterday suspended the membership of five of its senior parliamentary members from the party.

No evidence for CID probe