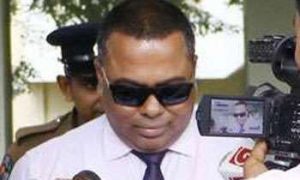 Former Terrorist Investigations Division (TID) DIG Nalaka de Silva has been ordered to be remanded further till 23 April over allegations of a plot to kill the President.

Nalaka de Silva was presented in court over allegations made by the Criminal Investigations Department (CID) claiming that there was evidence proving that he was involved in a plot to assassinate President  Maithripala Sirisena and former Defence Secretary Gotabaya Rajapaksa.

February 25, 2020 byTSM Web Desk No Comments
An SLAF Bell 212 Helicopter has been deployed in the Rajagiriya area to conduct Bambi Bucket Operations to douse a fire in a marshy land

March 27, 2020 byTSM Web Desk No Comments
President Gotabaya Rajapaksa has directed the Sri Lanka Ports Authority (SLPA) to provide concessions to ships and the business community in light of the coronavirus outbreak in the country.