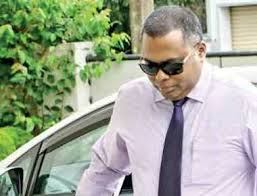 The Criminal Investigations Department (CID) has today handed over the report submitted by the Government Analyst’s Department on the results of the tests conducted of the voice recordings of DIG Nalaka de Silva and Namal Kumara.
The CID has submitted the Government’s Analyst’s finding to the Fort Magistrate’s Court.
The Government Analyst conducted a test on several voice recordings alleged to have contained the voice of DIG de Silva submitted by Namal Kumara, who has claimed that the DIG was engaged in an alleged plot to assassinate President Maithripala Sirisena and several opposition VIPs.
Tweet
Share
Pin
Share8
8 Shares

February 11, 2020 byTSM Web Desk No Comments
UNP Parliamentarian Niroshan Fernando today said that the government is planning to hold parliamentary polls before the 25th of April.

July 29, 2019 byRandev No Comments
Dinesh Nuwan Amaratunga, the mathematics tutor who was taken into custody over the incident of assault of a van driver has been further remanded.