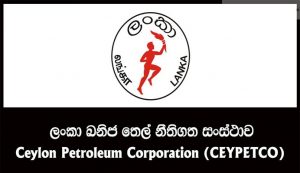 The Ceylon Petroleum Corporation (CPC) has decided to suspend the fuel supply to two key government institutions over pending dues if they failed to submit a settlement plan by 1 October.

CPC Chairman G.S. Withanage said the decision was taken at a meeting held with the CPC’s senior management and Board of Directors last Wednesday (11) as a solution to reduce the losses incurred by the CPC by supplying fuel on credit, mainly to SriLankan Airlines and the Ceylon Electricity Board (CEB).

He told The Sunday Morning that the Corporation would give till 1 October for these institutions to come up with a settlement plan, failing which the fuel supply would be suspended.

“If the political leadership says otherwise, they will need to issue directives through the Cabinet. We have given them a time period and thereafter, we will take action. Even though these are state-owned institutions like the CPC, if they have purchased products from the CPC, they should pay for it,” Withanage added.

He said that he issued directives to inform the CEB of the decision in writing, and to notify them that they should come up with a payment plan.

Withanage said that he signed a letter addressed to the Secretary to the Ministry of Power and Energy yesterday (14) informing him of the decision taken to suspend the fuel supply.

He said that a similar letter was sent to SriLankan Airlines earlier.

“We can’t go beyond the credit limit,” he stressed.

The Sunday Morning also asked the Chairman if the Corporation had plans to go ahead with a Cabinet decision to reduce jet fuel prices to match those at the Chennai Airport.

Responding to the query, Withanage said they will need to reduce the price since it’s a Cabinet decision.

The aviation fuel business remains one of the few profitable operations for the CPC, which contributed Rs. 64 billion in revenue in 2018.

In July, the Cabinet decided to grant several concessions to the travel industry, including a reduction in aviation fuel prices to the levels of India’s Chennai Airport, to support the recovery of Sri Lanka’s tourism sector in the aftermath of the Easter Sunday attacks.

February 10, 2020 byTSM Web Desk No Comments
Minister of Small and Medium Business and Enterprise Development, Wimal Weerawansa today claimed that the United National Party(UNP) was planning to hold the parliamentary elections before the 21 of A