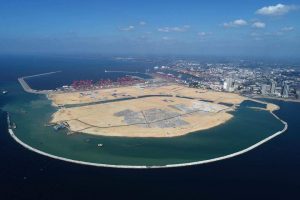 The breakwater of the Colombo Port City, officially known as Colombo International Financial City (CIFC), has been damaged twice during the construction period up to
now, The Sunday Morning reliably learnt.

The second and most recent incident had occurred in mid-2019 due to heavy winds which created powerful waves.

“Heavy wind created heavy waves and it damaged around 50 m of built breakwater. It was repaired at that time itself,” said CHEC Port City Colombo (Pvt.) Ltd Head of Public Relations KassapaSenarath.

While both instances of damages had been fixed by the engineers, The Sunday Morning understands that no guarantee or quality test had been conducted so far by the relevant authorities to ensure the durability of the breakwater.

Attempts made by The Sunday Morning to contact former Project Director Nihal Fernando and present Project Director Eng. BimalPrabhathGonaduwage were futile as they refused to comment on the matter.

Fernando said he had no right to comment on the project as he was no longer involved with the project, while Gonaduwage stressed that he needed a written request to comment to the media.

However, Senarath said quality assurance had been provided by Netherland’s Royal HaskoningDHV, an independent international engineering and project management consultancy.

He added the construction of the 3.2 km-long breakwater at the Port City had been completed only as of last July 2019 and that it is not alarming to see certain cracks or damages at such an early stage.

“After construction was completed, there were no reports of damages because a breakwater is built step by step and is a continuous process. The reclamation was completed in January 2019, but the breakwater was still under construction even at that time. Even when you build a house, you need at least six months to see the settlement cracks and other areas you need to improve. Now, even that stage has been completed,” he explained.

Senarath further said the construction of the breakwater had been conducted by a Dutch company and their duty was to constantly monitor and report the progress of the construction.

“Six months have passed since the construction and there were no incidents reported,” he said.

Former Minister of Megapolis and Western Development PataliChampikaRanawaka also confirmed that there had been one incident reported but it had already been rectified. “The incident was due to bad weather conditions,” he added.

March 1, 2020 bythemorninglk No Comments
The Election Commission’s (EC’s) latest estimation is that the upcoming parliamentary elections would cost around Rs. 5.5 billion, but the costs could swell to over Rs. 7.5 billion.