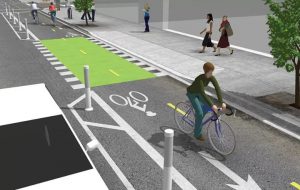 The construction of the proposed cycle lane from the Colombo Port to Diyatha Uyana in Battaramulla would be carried out by the Urban Development Authority (UDA) through local contractors and would be funded by the Treasury, UDA Director General Prasad Ranaweera told The Morning yesterday (27).

The initial project plan to build a cycle track connecting the Colombo Port City and Diyatha Uyana in Battaramulla, to reduce traffic congestion, is currently being developed by the UDA.

“The total cost of the project is yet to be calculated,” Ranaweera said.

According to the UDA, the cycle path will start at an access point of the Colombo Port City and will then continue parallelly to Galle Road until Beira Lake in Colombo 2, passing the Gangaramaya Temple, and then towards Viharamahadevi Park, passing the Colombo City Centre (CCC) building.

The proposed cycle path will then cut across the Viharamahadevi Park towards the Nelum Pokuna Mahinda Rajapaksa Theatre and will proceed towards the Borella Public Cemetery via Bauddhaloka Mawatha, passing the Colombo Arcade building.

Phase I of the project will trace a path towards the Colombo Golf Course and then towards Diyatha Uyana, passing the Kotte Wetlands.

The cycle path will then be constructed to proceed around Parliament and then back to Diyatha Uyana. Phase II will see the construction of the cycle path from Meethotamulla to the Floating Market Complex in Colombo via St. Sebastian Canal and the Hulftsdorp Court Complex, according to the UDA.

Under Phase I of the project, 11 bicycle renting stations will be constructed as well. The project will commence at the end of 2020 and will be completed in 2021.

May 11, 2020 byTSM Web Desk 1 Comment
The Public Health Inspectors’ Union of Sri Lanka (PHIUSL) yesterday (10) alleged that the Sri Lanka Navy (SLN) was not providing information about the Covid-19-positive navy personnel currently being