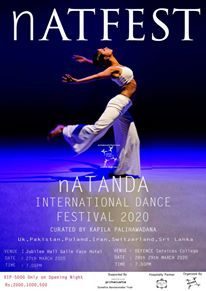 nATANDA is the first and only Sri Lankan professional contemporary dance company based in Colombo. It was founded in 2002 as a non-profit organisation by Kapila Palihawadana who trained in modern dance in Germany. The nATANDA dance troupe is trained in modern and classical Sri Lankan dance and has showcased their talents in Thailand, South Korea, the US, the Netherlands, India, and the UK.

The company was birthed on the idea of “dancing for reconciliation” in a once war-torn country; it is in the hope and belief that education through dance would encourage unity in cultures and minority groups in the island. The company reached new heights year after year by pushing the boundaries of dance theatre, looking beyond form, physicality, culture, and geography to richly and vibrantly portray aspects of life and nature.

The dancers of nATANDA are full-time professional dancers. Many of them had started off as young as 11 years old and maintain a relationship with the company into their adult careers. Artistic Director and Founder Kapila Palihawadana shared that he has been most fortunate to have worked with them.

Kapila shared that the dancers of the company started off with absolutely no background in dance and that now they are international-level performers.

Kapila studied and trained in Germany, where he primarily studied how to form and run a professional dance company. Upon his return, he shared his plans with his pupils at the time and then proceeded to set his plan in motion.

Kapila shared that they choose to perform contemporary dance so that they have the luxury of being all-inclusive. He provided that if they were to limit themselves to traditional dance, it would be somewhat divisive – it would either be specific to a certain culture or ancestry. “Contemporary dance allows us to include people from all walks of life and communities,” he said.

And so came about the birth of their titular annual dance festival “nATFEST”, or nATANDA International Dance Festival. It was first held in 2010 as a means of providing exposure for the company’s dancers, where a cultural exchange of dance and art took place and there was also the sharing of knowledge, skills, and tradition.

He said that while they are yet to receive government patronage, the British Council and the Swiss Embassy are onboard, offering great support in their endeavour.

He shared that dance companies form many countries, including the UK, Switzerland, India, South Korea, Japan, Bahrain, Brazil, Germany, and the US, were involved in the four festivals held over the past years, with artists and choreographers from these companies having come here, performed, and also conducted workshops in the country, which have provided for wonderful opportunities to learn. The ability to exchange the viewpoints of those from different backgrounds has been invaluable.

nATFEST has happened consecutively for four years, with the exception of 2019 due to the Easter Sunday bombings. The fifth edition is set to be staged in 2020, and while it was scheduled to take off from 27 March onwards, the global health crisis has led to its temporary halt. However, Kapila shared that they will announce the new date once things have settled down and people are safe.

Speaking about this year’s programme, he shared that they have a very fresh line-up of performances.

“Touch” by nATANDA, choreographed by Kapila himself, is a performance focusing on touch, which was inspired by an unfortunate incident of sexual harassment in public transport experienced by one of the company’s senior dancers. She had confided in Kapila that she was unable to make the commute to the dance company, which then halted her training. He shared how jarring it was to see the effect the incident had on her, and so chose to focus on this important aspect of our society and how touch, while at times beautiful, can also be dangerous, aggressive, and nasty.

There is also a performance titled “I Can”, which will be performed in collaboration with an ex-Sri Lanka Army differently abled soldier who lost his leg in the civil war and two foreign artists – Pakistan’s Ejaz Ul Haq and Poland’s Martha Polak. All three individuals will be sharing their individual experiences with war through the performance. “We wish to showcase that out of disability comes many possibilities,” Kapila said.

“Freezing Maze”, which will be performed in collaboration with an artist from the UK, is also a performance that was born out of a personal experience with the tragedy our island suffered last April. Kapila shared that he wasn’t in Sri Lanka when the Easter bombings took place and that he had come across an image of an infant crying, apparently for his mother who was a victim of the bombing, and said that upon seeing this image, he experienced a kind of dissociation – he was frozen and was unaware of his surroundings in a state of helplessness. “What can I do? I can’t do anything,” was what he thought, he said, and so this performance is his way of vocalising and showcasing the tragedy suffered by our people.

Finally, they will also feature “Flow” performed by nATANDA in collaboration with Swiss choreographer Alessandro Sachiattarella.

Considering the present condition of the world, art could possibly be the last thing on people’s minds. However, what nATANDA stands for – dancing for reconciliation – could be invaluable when this current tragic chapter is behind us.

A room full of energy

March 18, 2019 bythemorninglk No Comments
This Avengers prequel is the first female-led superhero movie in the Marvel Cinematic Universe, and was aptly premiered on International Women’s Day on 8 March 2019 in Savoy Cinemas.

June 12, 2019 bythemorninglk No Comments
One look at her beaming face makes one believe one never looked better at hitting 60! Born and bred in Brussels, Belgium, Fabienne Francotte is a self- taught artist.