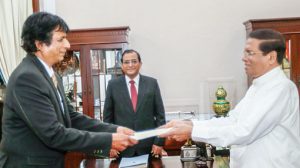 Former acting Attorney General de Livera was approved for the appointment as the new AG by the Constitutional Council unanimously on 7 May.

President’s Counsel Dappula de Livera was appointed the Acting Attorney General on 29 April, prior to this appointment, he served as the Solicitor General.

Total number of coronavirus cases rise to 91 in SL

March 23, 2020 byTSM Web Desk No Comments
The Health Ministry said 5 more patients have been tested positive for the coronavirus.

February 16, 2020 bythemorninglk No Comments
An Extraordinary Gazette was issued yesterday to establish the Sainthamaruthu Urban Council.