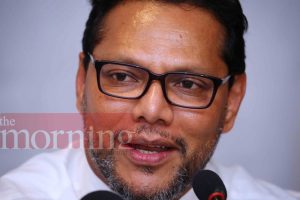 “Don’t attack me. It was your family that ruined our cricket. We are only trying to save it.”

Former Sport Minister Dayasiri Jayasekara, in retaliation to the recent comments made by former Sri Lanka cricket Captain and present Petroleum Resources Minister Arjuna Ranatunga on the status quo of Sri Lanka cricket, said it was the Ranatungas who were hand in hand with the so-called bookies before him.

He said so at a media briefing held at Nippon Hotel, Colombo on Wednesday, 26 September.

Arjuna was with Thilanga then –

“It was the Ranatungas who supported Thilanga Sumathipala to become the cricket board President after we won the 1996 World Cup. Now Arjuna is talking about the failure of the national cricket team. But he never talks about our 1999 World Cup debacle where we were eliminated from the very first-round itself in England under Arjuna,” recalled Jayasekara.

Presenting a copy of a letter dated 09/07/2008, former Sport Minister and a staunch confidante of the Sri Lanka Freedom Party faction of the present government, Jayasekara said Arjuna struck a deal with the China Harbor Company when the Sooriyawewa Mahinda Rajapaksa Stadium was made during Arjuna’s tenure as Sri Lanka Cricket President and caused a massive loss of Rs. 5 billion to the country, as a result.

“You should ask former President Mahinda Rajapaksa why he eventually chased out Arjuna from SLC presidency,” he told the media.

Jayasekara also said when Arjuna was the Sri Lanka captain, he wanted to insure the entire national team with an insurance company owned by him, named ‘P&A’.

“He ruined the harbour when he was the Minister of Ports and now, as the Petroleum Minister, he is unable even to distribute the fuel to the country in a proper manner,” added Jayasekara.

Only days before, Arjuna Ranatunga, while elaborating on the present downfall of the national cricket team to the media, accused Dayasiri Jayasekara for allowing bookmakers to enter cricket administration and predicted people will one day call Dayasiri ‘bookie-siri’ for the blunder.

An agitated Jayasekara, who threatened further revelations if Arjuna is to censure him again, said the Ranatungas were one reason for the present predicament of the sport.

“Now he is talking about my changing of political stance with regards to my affiliation with President Maithripala Sirisena. I would ask what the actual political party of Arjuna Ranatunga is. He was first with the SLFP, then JVP and the Sarath Fonseka party, and now the UNF. He is likely to join the Mahinda Rajapaksa party soon. He doesn’t have one party. He was the only MP who didn’t address at least a single political rally during the recent Local Govt. election campaign,” Jayasekara remembered.

“Don’t attack me. It was your family that ruined our cricket. We are only trying to save it,” he further said.

May 22, 2020 byTSM Web Desk No Comments
The Attorney General has requested the Supreme Court (SC) to dismiss the petitions against the polls date.

June 24, 2020 byTSM Web Desk No Comments
The Election Commission (EC) will conduct mock counting exercises to determine efficient methods for the same and also the timeframe that would be required to complete counting whilst adhering to the