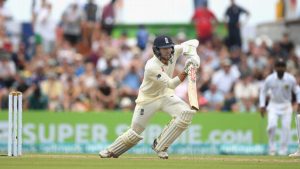 Ben Foakes was largely in the team for his wicketkeeping. That, at least, was one of the arguments. But following a morning session in which England’s more highly rated batsmen tangled themselves up in aggressive strokes and left the side at 103 for 5, it was debutant Foakes whose steady hand raised them gradually out of the ditch they had been in at lunch.

Foakes used the crease, skipped out to meet the spinners, and he swept as well, but he did each of these in a much more measured fashion than the men who batted above him. Thanks to him, and the men who batted well in his company – Jos Buttler, Sam Curran and Adil Rashid – England can even claim to have grasped a position of strength in this match. A score of 321 for 8 at stumps on day one is not shabby, in a Galle Test. Foakes himself was not out, 13 runs short of what would be a plucky century in his first Test innings.

Importantly, England also prevented Rangana Herath from imposing himself in the first innings of his final Test, and were also severe on the undisciplined Akila Dananjaya. Sri Lanka’s best bowler, by a distance, was offspinner Dilruwan Perera. Dogged and indomitable, he took 4 for 70 for the day, and in general looked like the kind of bowler who would do a manful job of leading the spin attack in the post-Herath era. Sri Lanka will worry, though, about the figures of Dananjaya in particular. He had had a catch dropped off him in the first session of the day, but went at 4.8 an over, finishing with figures of 1 for 96. In the second Test of this series and onward, he will be expected to bear a greater share of the bowling burden.

Williams into US Open final as she eyes Court’s record

September 7, 2018 byMalik No Comments
Serena Williams has another shot at winning her first Grand Slam title since giving birth after defeating Latvia's Anastasija Sevastova in 66 minutes in their US Open semi-final.

I always conducted myself with integrity – Jayasuriya

October 16, 2018 byRevatha No Comments
"[I] always conducted [myself] with integrity and transparency with matters concerning the sport," says Jayasuriya