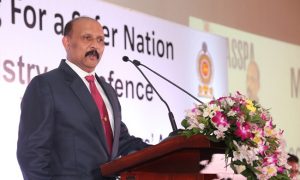 The Defence Ministry has announced plans to introduce a minimum wage for security guards.

Defence Secretary Maj. Gen. (Retd) Kamal Gunaratne has requested private security service agencies to pay fair salaries to their employees according to their contribution and the country’s cost of living.

The Defence Secretary added that measures would be taken to streamline registration and license renewal process of security service providers by formulating an expedited procedure.

Maj. Gen. Gunaratne said the contribution by the private security services to the Employees’ Provident Fund and the Employees’ Trust Fund would be strictly supervised under the new renewal process.

he stressed the necessity of issuing internationally recognized licenses for their employees.

Maj. Gen. Gunaratne, appreciating the services provided by the private sector security services, said they played a commendable role during the battle while extending their services to the required entities.

Highlighting the status of services, he requested the SLSSPA not to consider the valued service as a commercial venture and to be a part of the national security.

“There is no progress in country’s development in the absence of the national security and the needs of the military were overlooked during the previous administration”, he said.

May 29, 2019 byRandev No Comments
The Director of Information at the Ministry of Finance, Mohomad Ali Hassan was arrested by security forces today (29).

October 11, 2020 bythemorningeditor1 liberty No Comments
The Sri Lanka Transport Board (SLTB) is confident of bouncing back once the Covid19 outbreak has been contained, despite incurring a loss of Rs. 20 million daily.