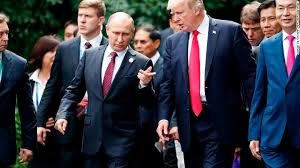 Democrats are keeping up the pressure on President Donald Trump following the long-awaited release of a report into Russian meddling in the 2016 election.

They want Robert Mueller, the man who collated the report, to publicly testify before Congress about the work he has done.

The redacted report, which was released on Thursday, reveals the president tried to get Mr Mueller fired.

Trump’s legal team has described its release as a “total victory”.

The 448-page redacted document is the result of a 22-month investigation by Mr Mueller, who was appointed to investigate alleged Russian interference in the 2016 election and possible collusion with the Trump campaign. (BBC)

January 8, 2020 byTSM Web Desk No Comments
At least two airbases housing US troops in Iraq have been hit by more than a dozen ballistic missiles, according to the US Department of Defence.