Diaspora willing to invest in the North but have concerns – Suresh

September 8, 2018 by The Sunday Morning No Comments 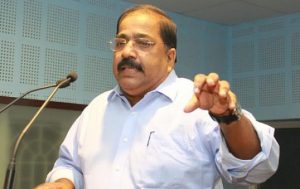 The Eelam People’s Revolutionary Liberation Front (EPRLF) Leader Suresh Premachandran says the Tamil diaspora want to invest in the North but have concerns if the money will be directed to the right channels.

Speaking to The Sunday Morning, Pemachandran said that the economic situation in the North is very poor with little or no employment opportunities for the youth, including rehabilitated LTTE cadres.
Pemachandran also said that India can do more to exert pressure on the Sri Lankan Government to uplift the economic conditions in the North.

Q: Overall what is your take on the current state of affairs in the North?
A: There is an issue with drugs being smuggled into Jaffna from India and Colombo. There is also an allegation that the Army and the Air Force is also involved in drug smuggling in Jaffna. So with all that, we see the youngsters involved in crime and violence. This must be brought under control but it has not happened yet.
Secondly, even after the war, there is a serious shortage of jobs. The youth in the North as well as the adults are looking for employment. Even the rehabilitated LTTE cadres are unable to find employment. The youth have an issue with their education qualifications to get a good job and banks are refusing to give them loans to start something. The Government has made so many promises but it has failed to fulfill its commitment.
There are also so many war widows and their concerns have not been met. So overall, people in the North are facing issues.

Q: Is the Northern Provincial Council doing its part to address some of these issues or get the attention of the Government?
A: The problem is that the Northern Provincial Council has been highlighting these issues but there is very little they can do to resolve these issues.
For example, law and order is not under their control. That is in the hands of the Central Government. Also any statute they pass in the Assembly has to be signed by the Governor – for example, the Chief Minister’s Fund.
That was passed by the Assembly and sent to the Governor. He sent it to the Attorney General and that is still with them for over a year. If that fund was approved the diaspora and others would have sent money which could be used for projects in the North to help the people.
Also when the Government allocates funds for the North, they earmark the projects they want it to be used for. The money is allocated for various sectors like education and agriculture the way they want. There is no extra money for any other projects.
So basically, the Northern Provincial Council needs adequate powers to take decisions on its own.

Q: So in other words, you are saying there needs to be devolution of powers to the provinces?
A: Yes. And the Central Government must not interfere.

Q: But the concern is that the powers might be misused by the provincial councils, especially police powers.
A: How can one say that? Is the Centre not misusing the powers? What are they doing in Colombo? Be it the Police or any department, are they not misusing their powers? The Centre must rectify their mistakes before trying to point fingers.
All over the world the police is a devolved power. You take India for example. The police powers are completely devolved there. So why cannot they devolve powers here?
Q: Since you mentioned India, we see that India has a very close relationship with this Government. Can India do more to push this Government to address the issues in the North?
A: India is doing a lot for the people in the North and East. They have given houses, ambulances, a cultural centre, they have constructed the railway network and in the future they hope to develop the Palaly Airport. They are doing a lot and yes, they can do more; but the request must come from the Sri Lankan Government. If they request India to invest in the North then India can create more job opportunities for the people in the North.
The Government needs to set the system in place then people will invest in the North. There are people willing to do so as well from Tamil Nadu and other parts of India.
Even the diaspora want to invest, but the provincial government does not have the powers to accept investments. It needs to come through the BOI; but the diaspora are not willing to do that.
Earlier, the diaspora were not willing to visit the country because there was a fear they will be branded as LTTE members. Today, the diaspora are still not keen to come and invest because the Northern Provincial Council does not have the powers to decide where they money should go.
So the provincial councils must be strengthened.

Q: In your opinion are the Tamil political parties doing enough for the Tamil people?
A: I don’t think so. The Tamil National Alliance (TNA) is the elected political party of the Tamils. They must take up the issues in Parliament. But I don’t think they are doing it.
The TNA leadership is attempting to convince the Tamils that once a new Constitution is created the issues faced by the Tamils in the North will be resolved.
The question is if the Constitution will be a new one or just reforms to the existing one.

Q: So what will happen when the next election takes place? What will your party do?
A: I think there will be a new Tamil front to contest the elections in the North. More details on the leadership of the new alliance will be made public soon.

Assets and liabilities declarations – Six candidates yet to submit

October 27, 2019 byThe Sunday Morning No Comments
Six out of the 35 presidential candidates are yet to submit their assets and liabilities declarations, according to the Election Commission (EC).

August 27, 2019 byTSM Web Desk No Comments
The United National Party (UNP) has decided to launch disciplinary inquiries against ministers Ajith P. Perera and Sujeewa Senasinghe for criticizing the party’s leadership and its decisions.