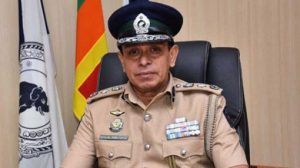 SDIG Latheef testifying before the Parliamentary Select Committee today (25), said that the STF could have easily averted the attacks had the other security agencies shared he information.

SDIG Latiff: I have been asking to have the presence of STF in the National Security Council as far back as from during the times of North-East conflict. Now it is not so. Even now, we are not invited to the meeting and we have been asking repeatedly but it is not granted.

Field Marshal Fonseka: The STF is used for VIP protection and narcotic operations currently.  What would have you done with that information of the imminent attack? Could you have prevented it?

SDIG Latiff: We could have. The STF could launch its operations on its own. But the procedure is that we are summoned and given orders because there are other agencies working on various security issues. The STF acts only when the special task is given to them. If we had been given the information we could have deployed our men and prevented those six attackers coming to those locations. We have contingency plans. We could have sent men to the churches and hotels. Our presence alone could have disrupted the plans of the attackers. Now I gather from media that there had been information of the possible locations of the attacks on April 20. If that information had been given to us even on the eve of April 20, we could have prevented the disaster.

In addition, he categorically said that there was no link between the 21/4 attack and the illegal narcotics racket.

Responding to a question posed by JVP MP Dr Nalinda Jayatissa, SDIG Latiff said that investigation had not uncovered any connections between the drug trade and the terrorist attacks.

Dr Jayatissa: Is there any link between narcotics and April 21 incidents?

SDIG Latiff: We have no information to that effect.

Dr Jayatissa: Is there any link between Easter Sunday attacks and arrest of Makandure Madush?

SDIG Latiff: We do not think so. We have no evidence to prove it.

CID to investigate negligence of officials

June 4, 2019 byRandev No Comments
An investigation has been launched by the Criminal Investigations Department (CID) to look into the alleged negligence of certain officials in connection with the Easter Sunday attacks.

August 26, 2020 bythemorningeditor1 liberty No Comments
So far, no action has been taken against those who violated the health guidelines issued by the Government after the country was reopened following the end of the Covid-19-related curfew that prevaile