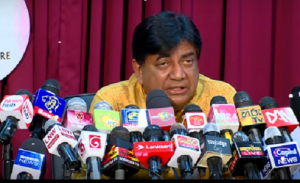 He expressed these views during a media briefing in Colombo today.

Perera said the alleged incident was a fabricated story by the opposition to bring disrespect to the newly appointed President Gotabaya Rajapaksa.

“The Swiss embassy staffer is merely an actor in a drama produced by the United National Party(UNP) and Directed by Rajitha Senaratne.”

December 21, 2018 byEaswaran No Comments
The price of fuel will be reduced from midnight tonight, Prime Minister Ranil Wickremesinghe said today.

May 27, 2019 byRandev No Comments
During a meeting with a group of foreign diplomats, President Maithripala Sirisena has said that he is hopeful that the Emergency Regulations will be lifted within the next month.