Former all-rounder Dilhara Lokuhettige has become the third ex-Sri Lanka player to be charged with corruption-related offences, this time for allegedly breaching the Emirates Cricket Board’s anti-corruption code. The charges, of which there are three, relate to the T10 Cricket League played in December last year. 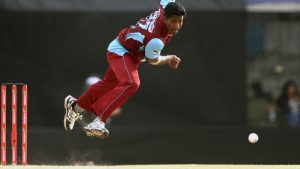 Lokuhettige is understood to currently reside in Australia, but has links to the cricket system in Sri Lanka. He was recently seen allegedly talking about a fix in Al Jazeera’s “Cricket’s Match Fixers” documentary, which was aired in May

The charges are as follows:

Being party to an effort to fix or contrive or to otherwise influence improperly the result, progress, conduct, or other aspect(s) of a domestic match.

Directly soliciting, inducing, enticing or encouraging a player to [improperly influence a match]

Lokuhettige is understood to currently reside in Australia, but has links to the cricket system in Sri Lanka. He was recently seen allegedly talking about a fix in Al Jazeera’s “Cricket’s Match Fixers” documentary, which was aired in May.

Lokuhettige, 38, was not part of any of the T10 squads, nor had he been an official member of the coaching staff in any of the six sides that took part in the competition.

A “Team Sri Lanka” side comprising a mix of domestic and international players did take part in the competition, however. The team’s bowling coach was Nuwan Zoysa, who has been separately charged under the ICC’s anti-corruption code over the last fortnight. Although charged under different official codes, the charges for Zoysa and Lokuhettige bear similarities. Both are accused of being party to an effort to fix or otherwise influence a match, of soliciting inducing or encouraging another player, and of failing to disclose an approach.

In addition to Lokuhettige and Zoysa, the other ex-player charged with corruption-related offences over the past few weeks is Sanath Jayasuriya. Unlike Lokuhettige, who has not held any official positions with SLC over the past two years, Zoysa and Jayasuriya had been part of the local system, the former as a bowling coach with the A team and several development squads, and the latter as chief selector.

November 19, 2019 byTSM Web Desk No Comments
Bangladesh want to get as much practice as possible under the pink ball. This much has been evident from their training routine and intensity in the two days following their three-day defeat by India