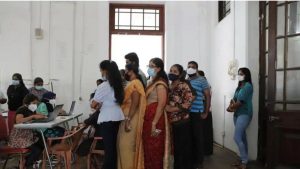 For months, Sri Lanka has been celebrated as a nation that succeeded in containing the spread of Covid-19, with authorities repeatedly assuring the public that there was no community spread in the country. However, in early October (4), this illusion was shattered, when a female employee of an apparel factory in Minuwangoda tested positive for Covid-19. Just over a week later, over 1,300 workers and their close contacts had tested positive, increasing the total number of cases in Sri Lanka to 4,752 as of 12 October 2020. It has been revealed that the outbreak is not limited to just one apparel factory as previously thought, with several workers from other factories also testing positive. This is the largest Covid-19 cluster in Sri Lanka so far, and the cases are steadily on the rise, with the Government scrambling to trace contacts and conduct testing.

With this latest outbreak, garment factory workers are at a higher risk of contracting the disease. Poor working conditions in the factories – where health guidelines have been ignored – and the employees’ close proximity to each other in factories and living quarters have been blamed for the outbreak. Meanwhile, there have been allegations that the factory employers forced the garment workers to report to work, despite falling ill. Worryingly, females make up around 78% of the apparel industry’s workforce in Sri Lanka, according to the Institute of Policy Studies of Sri Lanka (IPS). This means that, currently, females face a greater threat of contracting Covid-19.

Furthermore, according to a Health Labour Market Analysis (2018) conducted by the Ministry of Health, Nutrition, and Indigenous Medicine of Sri Lanka and the World Health Organisation (WHO), in Sri Lanka, 62% of health and social work jobs are held by females; in addition, most nurses are female, over half the medical students are female, and around 70% of students enrolled in paramedical education are female. According to research by the Association of Private Hospitals and Nursing Homes, women make up almost 70% of the private health sector. All of this indicates that Sri Lanka’s health sector is made up of mostly females. Thus, in a medical crisis such as the current pandemic, there is not only a heavier burden on women, but they are at a greater risk of getting infected by the virus.

Unfortunately, the direct threat of catching Covid-19 is not the only problem faced by women. Research has shown that women are affected more severely by the economic fallout of the pandemic than men. According to a report by UN Women (2020), women are more vulnerable to layoffs and loss of income, because women typically hold less secure jobs than men. The report also notes that, globally, the sectors that are hardest hit by the crisis are dominated by females. In these jobs, the pay is low and working conditions are dire.

Sri Lanka’s apparel industry – heavily populated by female garment workers – is a good example. Even before the sector was hit by this latest wave of Covid-19, the apparel industry was struggling due to a fall in demand as a result of the global economic crisis triggered by the pandemic. The Joint Apparel Association Forum (JAAF) estimated that the industry will lose close to 100,000 jobs. With the industry being so feminised, it means that job cuts will affect more women than men.

The problem is not just affecting the apparel industry. Another group who are heavily affected are domestic workers – another female-dominant sector. The report by UN Women shows that mobility restrictions imposed to contain the spread of the pandemic means that it is difficult for domestic workers to maintain their usual working arrangements. Moreover, employers have refused to pay wages to the domestic workers who were unable to report to work during the lockdown period. Globally, 740 million women work in the informal economy and their income fell by 60% during the first month of the pandemic. As the Centre for Poverty Analysis (CEPA) has shown, “the bulk of Sri Lanka’s female workforce is in the informal sector working as domestic workers, commercial sex workers, caretakers, cleaners, entrepreneurs, estate workers, and small-scale business women” – most of whom have experienced income losses.

In the case of Sri Lanka, the especially vulnerable are female domestic workers who are employed as migrant workers, chiefly in the Middle East. Thousands of workers were laid off and were sent back, many of whom were infected with the virus due to the dire situation in their countries of destination. Media reports showed that many of them were left stranded in makeshift camps until they could be repatriated to Sri Lanka. However, with the latest outbreak, the Government has temporarily halted the repatriation of all migrant workers, not just leaving them exposed to the risk of infection, but also without an income nor a way back home to safety.

Meanwhile, Sri Lanka’s already-low female labour force participation of around 35% is expected to worsen due to the pandemic. This means that more women have or are on the brink of losing their livelihoods and incomes.

As if things are not bad enough for women, they are also victimised by the “shadow pandemic”. One of the most alarming indirect impacts of the current pandemic has been the dramatic increase in violence against women – especially during the lockdown periods. BBC reported of a 20% increase in domestic violence cases, globally, during the lockdown. According to the World Bank, “forced coexistence, job loss, escalating stress, and anxiety about the future has led to increased household tension, which turned many partners into abusers and exacerbated existing abuse”. As they are unable to leave home, women cannot seek the help of friends and family; in most cases, they are also unable to seek legal or medical help, leaving them trapped with their abusers.

Like in many other countries around the world, in Sri Lanka too, there are many women for whom the home is not the safest place. Anecdotal evidence shows that lesbian and bisexual women are even more vulnerable to violence at home. This situation has only worsened with the pandemic, as mobility restrictions have meant that women are not able to access their safe spaces and seek the help they need.

While the health crisis continues to ravage the country, Sri Lanka cannot ignore the socioeconomic inequalities that are widened as a result of the Covid-19 situation. Unsurprisingly, women have received the shorter end of the stick and are more vulnerable to the lasting negative impacts of the pandemic. With its already poor track record when it comes to gender equality, the current pandemic has shown just how long of a road Sri Lanka has ahead of itself to empower and safeguard women’s lives and livelihoods.

(The writer is the Media and Communications Officer at Equal Ground)

April 5, 2020 byCharindra No Comments
Keells Super discusses the measures it has taken to cater to the massive online demand while ensuring the safety of employees and customers.