September 25, 2019 by The Sunday Morning No Comments 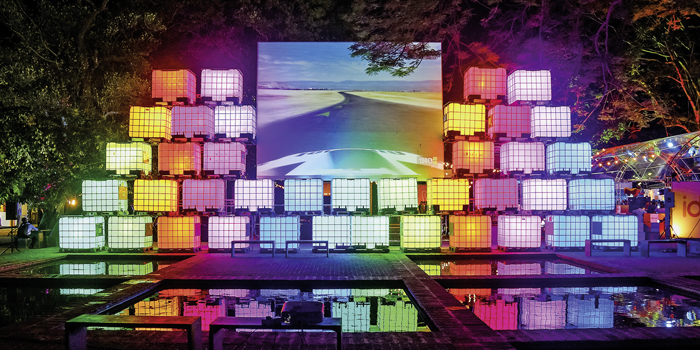 Disrupt Asia 2019, the fourth consecutive instalment of the conference, will be held on 12 October from 2 p.m. onwards at the Nelum Pokuna Theatre, Colombo 7. 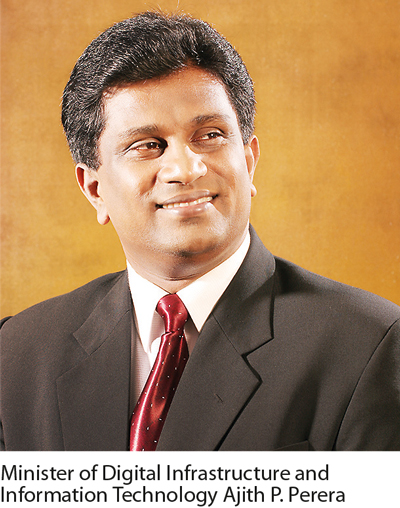 The conference, endorsed by the Ministry of Digital Infrastructure and Information Technology and supported by several partners, hopes to inspire aspiring entrepreneurs and guide early-stage start-ups.

With Central Bank reports revealing that earnings from the export of telecommunications, computer, and information services having increased and that the knowledge services industry in Sri Lanka is expected to grow up to $ 5 billion in annual export revenue by 2022, Non-Cabinet Minister of Digital Infrastructure and Information Technology Ajith P. Perera stated that this sector has proven to be a game changer. He provided that the objective of ICTA’s initiative is to ensure Sri Lanka can optimise emerging digital opportunities through progressive policies and innovation in both the public and private sectors.

The conference also coincides with another Ministry initiative, “ICT and Innovation Week” held from 7 to 14 October, the proceedings of which aim to drive Sri Lanka towards digital growth.

This year’s theme is “Augmented Living”, which focuses on “amplifying the successes of innovation and technology towards supporting human lifestyles and its ability to make a real and lasting contribution to development”, said ICTA Programme Head – Industry Development, Sachindra Samararatne. 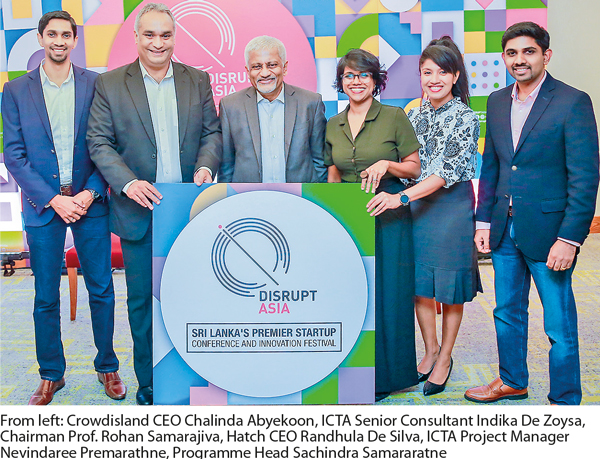 According to Samararatne, Disrupt Asia was a result of multiple factors. “The ICTA along with start-ups in 2010 decided to give prominence to nurturing an innovation ecosystem in Sri Lanka, and around 2016, we realised the lack of a platform to connect players in this field. Stemming from this understanding and having been inspired by tech start-up conferences like Asia’s largest ‘RISE’ in Hong Kong, ‘Techsauce’ in Thailnad, and the world’s largest ‘Web Summit’ in Lisbon, Disrupt Asia was born.”
He said that while it is predominantly funded by the Government, it has by and large remained a community event, with in-kind partners supporting and taking part in the organising of the event.

Speaking about the success of the event in the past years, ICTA Chairman Prof. Rohan Samarajiva said: “In just three years, Disrupt Asia is now recognised as Sri Lanka’s premier summit to celebrate local start-up innovation, supporting their growth and building a community. This year’s conference theme Augmented Living will ensure dynamic conversation and fresh perspectives for all participants. The conference and festival also provides an ideal platform for start-ups to network with investors, gain actionable advice, gain insights into start-up strategy, and acquire possibilities of global expansion, helping drive an era of tech innovation for Sri Lanka.”

Samararatne further added that Disrupt Asia celebrates entrepreneurs. “The event is heavily focused on entrepreneurs. The success of entrepreneurs is dependent on whether they can actually go global. We hope to inspire curiosity, which then allows the creation of a product and helps find the right connections to take it forward,” he said. 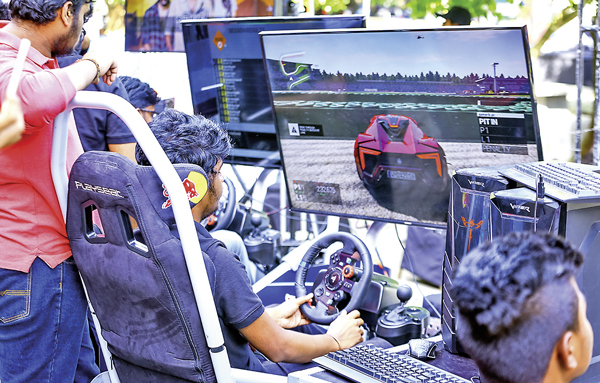 The event focuses primarily on tech start-ups as, according to Sachindra, in Sri Lanka, the fastest-growing area at an exponential speed are the tech start-ups such as PickMe and oDoc, to name a few.

While the number of technology-related start-ups in Sri Lanka has grown over the last several years, with many gaining considerable success, quite a few have also failed. One of the major reasons for these failures is not having the proper guidance/mentoring as well as financial issues.

With this in mind, Disrupt Asia brings together some of the best start-up veterans to share their experience with new start-up founders and address many burning questions budding entrepreneurs have. 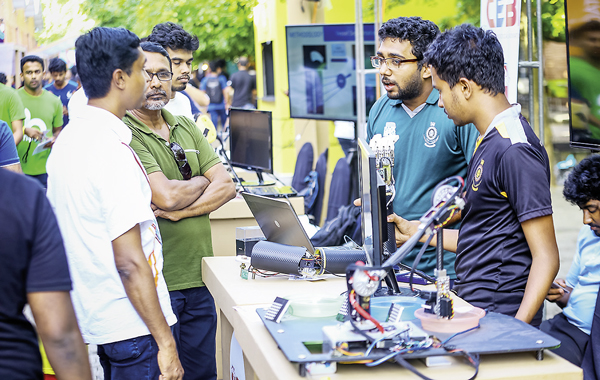 A start-up battle is a pitching competition where shortlisted start-ups can pitch and win prizes, with a judging panel consisting of local and foreign experts. There’s an attractive prize which awaits the winners and runners up of the battle, said Samararatne. He also provided that they win themselves a highly coveted spot at the invite-only Seedstars Asia Summit which would essentially costs nearly $ 3,000 to take part as an individual. In addition, competition winners will also receive industry exposure and valuable mentoring support from local and international experts – from organisations such as Seedstars and AngelHack.

The innovation festival at the event comprises the start-up showcase, which will provide the opportunity for selected start-ups to showcase their offering to the attendees of Disrupt Asia. Samararatne stated that throughout the years, many start-ups have launched their final product, conducted activations to popularise the product, or simply created awareness among their target audience at Disrupt Asia.

The event also has a running theme throughout “to bring the human back into innovation”, as the conference focuses on promoting STEAM education (science, technology, engineering, arts, and mathematics) which is a key pillar of the innovation ecosystem. Samararatne added: “This is one of our reasons for choosing Nelum Pokuna as our venue as well, due to its iconic artistic value.”

The conference is using art as a catalyst for the second time running to showcase the future. Titled “When Digital Meets Art”, this year’s innovation festival and exhibition comprises art installations and digital activations.

The event will also feature five interactive panel discussions facilitating dialogue on how disruptive technologies are affecting and supporting the quality of lifestyles of citizens in relation to leisure, economic growth, and sustainable living.

With an expected audience of over 1,000, attendees are guaranteed to learn through knowledge sharing, taking back actionable best practices, and other valuable insights inspiring creativity and strategic growth.

Finally, the conference’s keynotes are to be conducted by impressive eminent start-up personalities Casie Lau and Amarit Charoenphan. Recognised as one of Hong Kong’s tech start-up pioneers and sought-after speaker, Lau is also, among other accomplishments, the current Co-host of RISE – the Web Summit’s Asia conference reputed as the largest tech conference in the region.

Charoenphan, more popularly known as Aim, is also a leading personality in the Asian tech ecosystem. He is the Executive Chairman of HUBBA, Thailand’s first and largest co-working space, and Co-founder of Techsauce, another leading tech conference in Southeast Asia.

According to Samararatne, both Lau and Charoenphan are renowned ecosystem builders and they are not here in a participatory capacity. Both these individuals are bringing forth their expertise to help elevate the existing start-up ecosystem in the island.

He said that the team at ICTA are hopeful that the continued fruition of conferences such as Disrupt Asia will assist Sri Lanka get a leg up in the digital rat race, providing that when it comes to networking and building the right connections, Sri Lanka is somewhat isolated – it could be our island mentality and also, unlike Southeast Asian nations that are all connected to one another like Indonesia, Singapore, Malaysia, and Thailand, Sri Lanka is somewhat alone. We are not so connected with Asia, and Disrupt Asia hopes to bridge that divide.

A love story from heaven

Stoners Korner: Made with love

June 8, 2020 byJennifer No Comments
Stoners Korner has not been around for very long, having been about two weeks old, but it is certainly not like any other rookie you’ve come across.