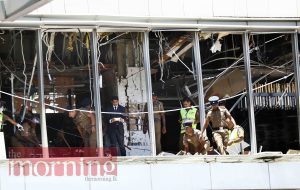 The Colombo Fort Magistrate’s Cout has ordered the Criminal Investigation Department (CID) to verify the identities of the Easter Sunday suicide bombers through DNA tests.

Yesterday (09) the CID informed the Court that the suicide bombing attacks on Shangri-La Hotel were carried out by Zahran Hashim and Mohamed Ibrahim Ilham Ahmed.

To affirm this claim, Colombo Fort Magistrate, Ranga Dissanayake has ordered that a DNA test be conducted by the Colombo Judicial Medical Officer on  Zahran Hashim’s sister as well to confirm the brother’s identity.

Hashim’s sister is currently being held in the Batticaloa Prison, the Court has given a five-day time period for the Prison Superintendent to bring her to Colombo.

September 27, 2018 byEaswaran No Comments
Minister Malik Samarawickrama the government had developed a new plan to make the Hambantota port viable.

May 12, 2020 byTSM Web Desk No Comments
Former Janatha Vimukthi Peramuna (JVP) MP Sunil Handunnetti has lodged a complaint with the Election Commission (EC) against the approval granted by the Cabinet to allow state ministers to use governm