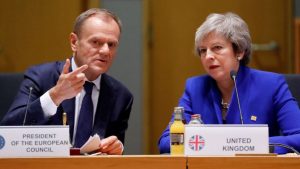 European Council President Donald Tusk is proposing to offer the UK a 12-month “flexible” extension to its Brexit date, according to a senior EU source.

His plan would allow the UK to leave sooner if Parliament ratifies a deal, but it would need to be agreed by EU leaders at a summit next week.

The UK’s Conservatives and Labour Party are set to continue Brexit talks later.

Attorney General Geoffrey Cox has told the BBC that if they fail, the delay is “likely to be a long one”.

The UK is due to leave the EU on 12 April and, as yet, no withdrawal deal has been approved by MPs.Downing Street said “technical” talks between Labour and the Conservatives on Thursday had been “productive” and would continue on Friday.

Prime Minister Theresa May has said a further postponement to the Brexit date is needed if the UK is to avoid leaving the EU without a deal, a scenario both EU leaders and many British MPs believe would create problems for businesses and cause difficulties at ports.

However, the PM wants to keep any delay as short as possible.

To do that, she and Labour leader Jeremy Corbyn would need to agree a proposal for MPs to vote on before 10 April, when EU leaders are expected to consider any extension request at an emergency summit.

If they cannot, May has said a number of options would be put to MPs “to determine which course to pursue”.

Cox told the BBC’s Political Thinking podcast that particular scenario would involve accepting whatever postponement the EU offered, which was likely to be “longer than just a few weeks or months”.

Europe’s leaders have been split over whether, and how, to grant any extension.

However, BBC Europe editor Katya Adler has been told by a senior EU official that Tusk “believes he’s come up with an answer”, after several hours of meetings in preparation for the summit.

“He believes the arrangement would suit the EU and the UK and, as one EU official put it to me, it would avoid Brussels potentially being faced with UK requests for repeated short extensions every few weeks,” she said. The EU has previously said that the UK must decide by 12 April whether it will stand candidates in May’s European Parliamentary elections, or else the option of a long extension to Brexit would become impossible.

The main item of business in the last frantic 24 hours has been the cross-party talks between the Conservatives and the Labour Party.

From both sides, it sounds like they are serious and genuine, and negotiators got into the guts of both their positions and technical details on Thursday.

Remember, behind the scenes there isn’t as much difference between the two sides’ versions of Brexit as the hue and cry of Parliament implies.

But the political, not the policy, distance between the two is plainly enormous.

December 13, 2018 byRandev No Comments
Canada's foreign ministry says it is trying to make contact with a second Canadian Michael Spavor who is believed to have been detained in China.