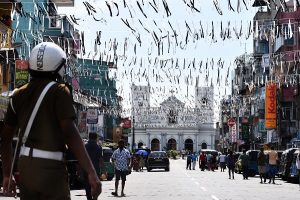 Last Wednesday (21) marked the fourth month since the Easter Sunday terror attacks, and 48 hours later (Friday), the emergency that was in place since then was allowed to lapse by the Minister of Defence President Maithripala Sirisena.

Needless to say, the past four months have placed the spotlight on the security forces that have done an extraordinary job in wiping out the National Thowheed Jamath terror outfit. They must be congratulated for the absolutely professional manner in which they have gone about their business in ensuring security in the country, paving the way for the state of emergency to be lifted.

Although it took a while for the security establishment to come to terms with the scale of Zahran’s terror organisation and the threat posed by it, the well-co-ordinated investigation by multiple state agencies succeeded in mopping up the backend, giving confidence to the authorities to lift the emergency regulations.

Meanwhile, the Police have gone on record stating that lifting the emergency regulations will in no way affect any of the ongoing investigations. This is indeed good news for the economy as it will further accelerate the return to normalcy, especially in the badly hit tourism and investment sectors.

Although the Government took a lot of flak for its failure to prevent the attacks despite credible intelligence, its post-event response has been professional and result-oriented.

According to available reports, the State has so far paid out Rs. 282 million to the affected families. The destroyed places of worship have also been fully restored with state resources and the healing process is being encouraged through multiple mediums.

Unfortunately however, with elections around the corner, the political vultures are out in numbers, determined to tug at the wounds and prevent the healing process from taking place. To add to this, religious dignitaries who should be preaching forgiveness in their churches and temples are instead preaching hatred and revenge.

The greatest tragedy of this nation and what is preventing it from becoming a developed nation is the involvement of clergy in politics. There is no other country in the world today where the clergy has so much political power and control.

Take Italy, the home of the Roman Catholic Church, for example. The country has been in political turmoil for the better part of the past decade, but one does not see the Vatican, which is located in Rome, or for that matter any catholic priests, getting involved in the country’s politics.

In Saudi Arabia, Muslim clergy have no say in the political affairs of the country which remains the exclusive domain of the country’s King.

In England, although the Queen is the head of the Church, she has steadfastly steered clear of politics even though Brexit continues to cause the biggest political upheaval in that country in the post-war era.

In Buddhist Thailand, China, Japan, and Korea, the monks confine themselves to temples and stay clear of politics.

Why is it then that in Sri Lanka, the highly politicised Buddhist monks, who have gone so far as being elected members of Parliament and various other local government bodies, are now being joined by an increasingly politicised Catholic Church, led by a Cardinal who is continuing to use the Easter tragedy for political purposes.

The outspoken Cardinal has now been joined by the Bishops Conference which instead of preaching the scriptures based on the foundation of forgiveness, is demanding fresh inquiries into the Easter attacks, no doubt with the upcoming elections in mind.

While the Catholic religious leaders are preaching politics, church-going Catholics are flocking to the evangelicals for spiritual succour.

Credit should however go to Cardinal Ranjith who, in the immediate aftermath of the Easter tragedy, prevented a secondary bloodbath by preaching forgiveness and soothing the nerves of an angry Christian community.

Recently however, there is a very noticeable change in tone and the Cardinal’s preaching has taken a completely political flavour, clearly aimed at toppling the Government in power. He in fact, has directly said so.

Although it remains to be seen whether the tail can wag the dog, the Christian block vote can certainly cause headaches for any party. What is unfortunate is that these days, there is little or no reference to the scriptures in the Cardinal’s sermons or to the forgiveness that his faith his based on.

The clergy of all denominations in this country will do well to first look after their flock rather than become tools for parties with vested interests. Given the way things are going, it is now only a matter of time before the Muslim and Hindu clergy too join the fray and fight for their share of the political pie.

Our religious leaders, be they Buddhist, Muslim, Christian, or Hindu, will do well to look beyond the percentage of population they preside over and consider the actual number of practitioners of the faith they preach.

Today, although 70% of the population is described as Buddhist due to the fact that the birth certificate states so, how many of this 70% are actually temple-going, practicing Buddhists?

The same goes for the Christians and others whose numbers may say one thing but when present in places of worship, another.

If the clergy does not return to their original roles, Sri Lanka is not a long way off from becoming a morally bankrupt nation.

China and India in a “scholarship war” in Sri Lanka

August 8, 2018 byThe Sunday Morning No Comments
China and India are virtually competing against each other, not just with infrastructure projects in Sri Lanka, but now with scholarships.....