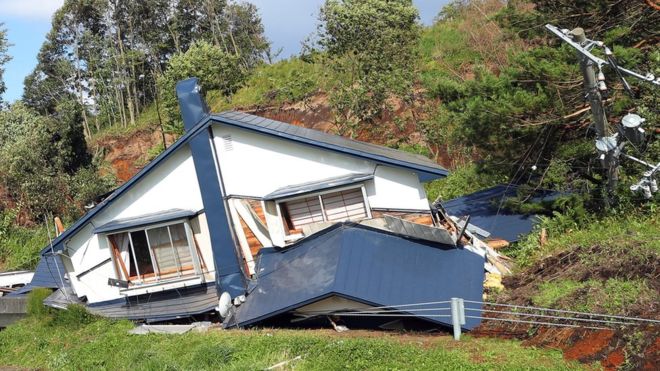 Japan’s northern island of Hokkaido has been hit by a powerful earthquake, triggering landslides that engulfed houses.

Two people had been killed and about 40 were missing, according to public broadcaster NHK.

The 6.7 magnitude quake cut power to around 3 million homes and shut down a nuclear plant in the region

The earthquake comes on the heels of a deadly typhoon lashing the west of Japan over the past few days.

The tremor struck 62km (39 miles) south-east of the regional capital Sapporo in the early hours of the morning.

It posed no tsunami risk, the country’s meteorological agency said.

Local residents and travellers in the region have shared their shock about the quake on social media.

They also write about long lines at food stores as people stock up on supplies amid fears of more tremors.

Authorities have warned of possible aftershocks and urged people to remain cautious.

“Large quakes often occur, especially within two to three days (of a big one),” Toshiyuki Matsumori of the meteorological agency said according to news agency AFP.

“We urge residents to pay full attention to seismic activity and rainfall and not to go into dangerous areas.”

Japan is one of the world’s most seismically active nations and accounts for around 20% of quakes worldwide of magnitude 6.0 or more.

The country is still recovering after the strongest typhoon in 25 years hit the west of Japan, killing at least 10 people. (BBC)

June 10, 2019 byRandev No Comments
Three men have been jailed for life for the rape, torture and murder of an eight-year-old Muslim girl in Indian-administered Kashmir.