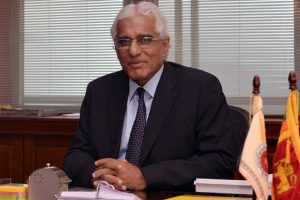 Dr. Indrajit Coomaraswamy served as the Governor of the Central Bank of Sri Lanka from July 2016 to December 2019. He has 30 years of experience in policy making and providing economic advisory services, on both macroeconomic and structural issues at National and Intergovernmental levels. He served as Director of Economic Affairs at the Commonwealth Secretariat. He was an official in the Central Bank of Sri Lanka from 1974 to 1989.

Dr Coomaraswamy was involved in advising the Hon Prime Minister and the Hon Minister of Economic Reform, Science and Technology, Sri Lanka on negotiating with Bretton Woods Institutions and other major donors and on matters relating to macroeconomics and structural reforms.

Dr. Coomaraswamy obtained his B.A. (Hon) and Masters in Economics from the Cambridge University of UK in 1972 and subsequently obtained a Doctorate from the University of Sussex in 1981. He has represented and led Sri Lanka National Rugby team. He led Sri Lanka National Rugby team 1974 in Rugby Asiad. Dr Coomaraswamy also played first class Cricket in Sri Lanka.

He was awarded Central Bank Governor of the Year, in South Asia for the year 2017 and conferred the title of “Deshamanya” by President Maithripala Sirisena last year.

Innovation-led exports can surpass $ 10 b: Stax

January 19, 2020 bythemorninglk No Comments
The passage of Sri Lanka’s first-ever Data Protection Bill, which has been eagerly awaited by the information and communication technology (ICT) industry and business, will be delayed significantly.