June 29, 2020 by Dimithri Wijesinghe No Comments

The British School in Colombo held Sri Lanka’s first-ever drive-through graduation ceremony on 25 June for their graduating class of 2020.

This special graduation was the brainchild of Principal Dr. John Scarth and the administration. The purpose was to provide this year’s school leavers with a sense of finality and ceremony to recognise and honour the achievements, hard work, and dedication of the students during their 13 years of school life.

The British School in Colombo Head of Administration Warren De Hoedt, speaking to The Morning Brunch, shared that The British School would traditionally have a grand celebration to recognise the students’ achievements in late June, adding that as the timing does not allow for such fanfare, this was the best they could offer for their students who very much deserve a memorable send off.

De Hoedt shared that customarily, they would hold this graduation in June because many students are set to travel to various universities around the world to begin their tertiary education. As most school years abroad begin soon after, students are not in Sri Lanka for their main prize giving held in September. 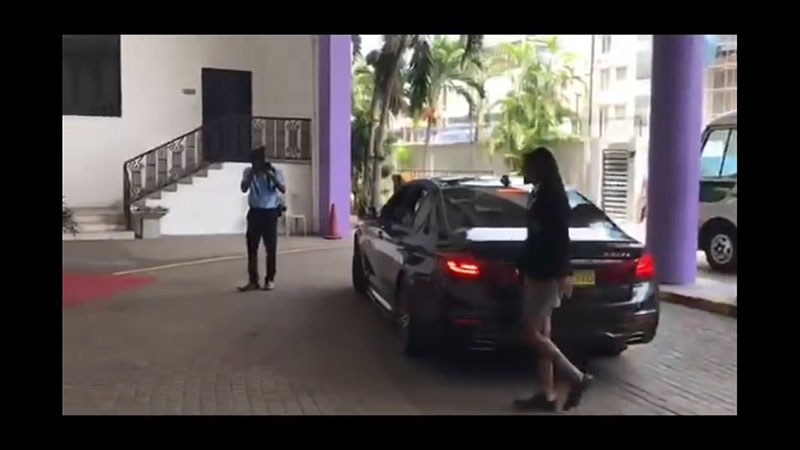 He shared that this year too they hope to host the main prize giving ceremony come September, if all is well with the status of the pandemic. However, at the moment, this is what they could provide for their students, and the administration was pleased that they could add a sense of ceremony and create for the students a momentous occasion despite the current state of the world.

The drive-through graduation, which was held at the main driveway of the school, saw teaching staff stand in line to the side at a temporary podium decorated in school colours with the names of the students being called up over the intercom. Each student was driven right up to the podium in their private vehicles, stepped out, received their award and graduation certificate from school officials, and drove away immediately after.

Drive-through graduations are a step up we have come to witness globally in the past few months, as we also saw tech giant Google produce a YouTube Originals series titled “Dear Class of 2020”, a virtual commencement celebration that brought together multiple inspiration leaders and artists to celebrate graduates, their families, and their communities online.

Live streamed on 8 June, students graduating all over the world were afforded the opportunity to receive a commencement address by the likes of Google CEO Sundar Pichai, Barack and Michelle Obama, and even American pop stars like Beyoncé and South Korean idols BTS, all of whom gave out commencement addresses specifically for the graduating class of 2020.

As the situation of the pandemic is getting more under control and contained, we have begun to see more events happening while maintaining the social distance and wearing protective gear. One such example has been school leavers celebrating the end of their school careers and their next step into either higher education or the job market.

While the pandemic has made it so that some of us are unable to go about in the traditional way, life has managed to go on and we are fortunate to have been healthy and seen another day, and on that thought, we would like to join Warren De Hoedt of The British School in Colombo who shared that he wishes to extend his warmest congratulations not only to the graduating class of 2020 at The British School in Colombo, but all others who are celebrating this important milestone in their student lives. We join him in congratulating you all and wishing the best for your bright future!

A song of courage, a song of strength

January 21, 2019 bythemorninglk No Comments
A brand new music video for the song Sinha Lokaye Sinhaya by popular musician Chitral Somapala was launched on 16 January at the Colombo City Centre.

December 31, 2018 bythemorninglk No Comments
2018 is coming to an end, and celebrations are in order. With 2019 looming in here’s some elegant makeup looks courtesy @rochellewick for you to try this New Year’s Eve!