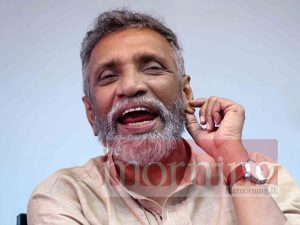 The Election Commission says it has decided to take measures to prevent dummy candidates from contesting  the forthcoming parliamentary Elections.

Deshapriya added that the Commission has further decided to increase the deposit value required to contest the election.

However, he noted that the Polls body has not yet decided on the final deposit value.

He said the Commission is currently under discussion on the number of affidavits a candidate should submit.

Deshapriya said laws preventing dummy candidates has to be brought forward by the Parliament.

A record 35 candidates contested the presidential elections that was held last month.

Deshapriya said the cost of the presidential election rose due to the number of candidates and the record length of the ballot paper.

April 29, 2020 byTSM Web Desk No Comments
The Human Rights Commission of Sri Lanka (HRCSL) in a letter to the Act. Inspector General of Police (Acting) C.D. Wickramaratne has requested that the legal bases for recent arrests for misinformatio

November 17, 2020 byMihi Perera No Comments
The use of single-use polythene and plastic productions would be banned from January 1, 2021, Prime Minister Mahinda Rajapaksa said.