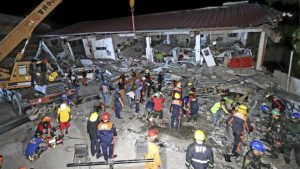 A powerful earthquake has struck the main Philippines island of Luzon, killing at least 11 people.

The magnitude 6.1 tremor hit at 17:11 local time (09:11 GMT) on Monday, the Philippines Institute of Volcanology and Seismology reports.

An airport was seriously damaged and at least two buildings were destroyed.

Authorities fear dozens of people remain trapped underneath a collapsed building in the province of Pampanga, north-west of the capital Manila.

The province is believed to be the worst-hit area. Its governor, Lilia Pineda, told Reuters news agency that 20 people had been injured there.

“They can be heard crying in pain,” she said of those trapped under the rubble. “It won’t be easy to rescue them.”

Ms Pineda told ABS-CBN television that three bodies had been pulled out of a shop following the earthquake, while a woman and her grandchild were found dead in the town of Lubao.

Twenty people have so far been rescued and taken to hospital, she added.

The earthquake was felt in Manila, where skyscrapers were seen swaying for several minutes in the business district.

Martial arts instructor Dani Justo recalled the moment she felt the earthquake at her Manila home.

“The clothes hanging on our line were really swaying. My shih tzu (dog) dropped flat on the ground,” she told AFP.

Social media users on the northern island posted photos of the damage caused by the quake, including cracked walls and swinging light fixtures.

One video posted to Twitter showed water cascading down the side of a skyscraper from its rooftop pool.

Classes at Manila’s De La Salle University are being suspended on Tuesday while building inspections are conducted.

The Philippines is part of the Pacific “Ring of Fire” – a zone of major seismic activity which has one of the world’s most active fault lines. (BBC)

November 30, 2019 byTSM Web Desk No Comments
The man who carried out Friday's stabbing attack at London Bridge was a former prisoner convicted of terrorism offences.

October 17, 2019 byTSM Web Desk No Comments
The twists and turns of Brexit - after more than three years of negotiations - dominate an EU summit on Thursday, amid signs of an emerging deal.