September 9, 2019 by Pubudu Chinthaka No Comments 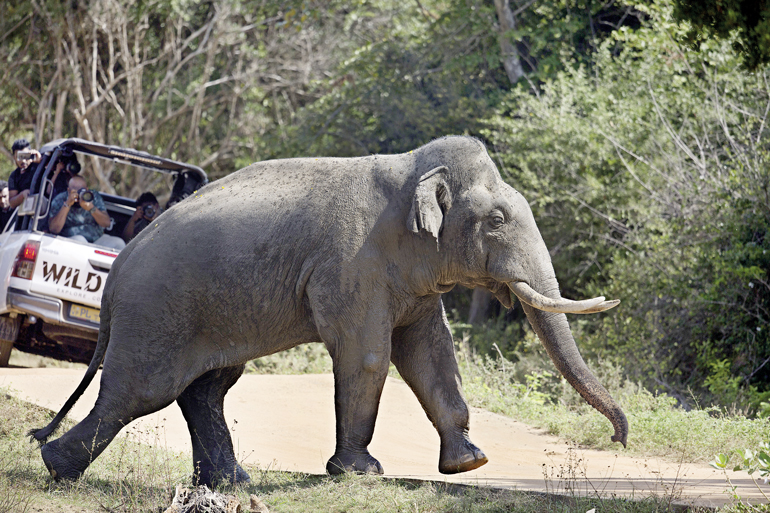 A topic frequently visited by environmentalists and activists, the death of wild elephants due to train accidents has not ceased to exist as of yet.

Despite various government committees being appointed to find feasible solutions to the problem, there has been little effort to combat this issue.

Speaking to The Sunday Morning Brunch, Department of Wildlife Conservation Director General Chandana Sooriyabandara stated that every year, an average of 10 elephants in Sri Lanka are subjected to railway accidents which result in their immediate death.

He also stated that natural disasters can further affect the rate of deaths, especially during the drought season when elephants cross railway lines quite frequently.

According to statistics by the Department of Wildlife Conservation, there has been a significant decrease in the number of elephant deaths due to railway accidents. In 2018, 15 elephants lost their lives due to this menace; however in 2019, up to September, the number dropped to five.

Wildlife rangers of the Department informed that special training was given to train engine operators and drivers in handling these situations, under the direction of the special parliamentary committee which was appointed to look into the matter by former Minister of Transport Nimal Siripala de Silva.

Further, measures have been adapted to send signals to engine drivers.

Conversing with us, Department of Railways Deputy General Manager A.D.G. Seneviratne stated that a new pilot project is currently being tested.

The need for more incentives towards technological advancement and innovation were much stressed upon by him.

According to the information received by Seneviratne, Irosh Perera, a well-educated engineer, has developed a model after three years of research in the wild to eradicate the problem once and for all.

Upon observing these gentle giants in the wild, Perera has identified how they communicate danger (through wave frequencies) and came up with a machine that can replicate the respective number of hertz, which can be fixed onto railway tracks.

He further stated that this innovation has been tested at the Pinnawalla Elephant Orphanage: “We obtained permission from the authorities and used this machine to transmit the specific sound, and the elephants ran away from it,” he said.

According to Seneviratne, this innovation will hopefully put a full stop to the railway track elephant deaths dilemma the country has been facing for many decades.

Speaking about his innovation, Irosh Perera gave his comments.

“We cannot put a value on the lives of elephants, and they have given their full support in ensuring that there are no more accidents between elephants and trains,” he said.

According to Perera, train-elephant collisions have cost the Department of Railways nearly Rs. 100 million last year. “I did some personal research a few years ago to minimise railway accidents of elephants.”

He further stated: “We tried to warn the driver earlier of incidents like these. So, we installed an electronic system which can identify the presence of elephants on the track.

“The system, which is always on alert, is said be able to identify approaching trains. “When a train is approaching, the system registers whether there are any elephants on the tracks. If there is an elephant, the system warns the driver using a colour light system on the railway track,” he said.

Furthermore, he said: “We installed a red light to indicate to the driver that there definitely is an elephant on the track. If the light is yellow, it alerts the driver to drive with caution. If the light is green, it confirms that there are no elephants on the train, it is therefore safe to pass through. We initiated this in Elephant Pass as a pilot project,” he said.

Afterward, Perera and his team proceeded to do a complete survey about the elephants on the tracks, identifying the areas prone to elephant crossings. They categorised these areas into two – (i) travelling from location “A” to “B” and (ii) elephants just roaming on the tracks, unaware of the danger it may bring to them.

According to these statistics, Perera stated that they are hoping to install these sensors all around the island.

“To gain more information and enhance this system, we are using electronic and sound sensors and engaging with the public in accident-prone areas,” Perera stated further.

Speaking on the matter of funding, Perera further stated that all pilot projects and surveys have been conducted by him at his own personal expense. “Some of it was done at my personal expense, but the Government is willing to fund the project once a feasibility report is handed over.”

There have been many efforts brought out by various parties to combat this issue in the past. These efforts have included electric fences developed by Japanese engineers which emit a low wattage of electricity to scare elephants away from the railway tracks, but this has failed to be a long-term solution.

Another pilot project in 2014 involved installing thermal cameras within these locomotives so that engine drivers are able to foresee incoming elephants passing.

The African Government set up barriers which consisted of large boulders and rocks so that elephants were unable to pass through.

Further, in India, this menace has been combatted by installing sound systems which emit the buzzing sound of bees when trains are passing through, so a fear-induced flee clears the area of these magnificent creatures. The Indian Ministry of Railways has further identified hotspots in several areas of the country and then limited the speed limit of trains to 18 km/h.

September 19, 2018 byJennifer No Comments
Kamer Nizamdeen, a 25-year-old Sri Lankan PhD student of the University of New South Wales was arrested on 30 August for owning a document which was allegedly connected with the preparation for

Dreams of Change: Land, Labour and Conflict in Sri Lanka

October 28, 2018 bythemorninglk No Comments
Book Review - a collection of essays written by Sarath Amunugama over many years on a variety of subjects relating to socio-economic change and political conflict in Sri Lanka.