November 20, 2018 by The Sunday Morning No Comments 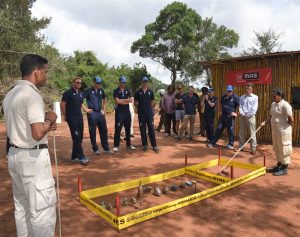 The Mines Advisory Group (MAG) is delighted to welcome members of the England cricket team to its operations in Periyamadu, in the north-west of Sri Lanka on Monday 19 November.

Following their test match, cricketers Joe Root (Captain), Jonny Bairstow, Keaton Jennings and Olly Stone will visit an area where MAG is clearing landmines. They will then play cricket with children at a nearby school.

Demining is a vital undertaking in Sri Lanka, supporting post-conflict peacebuilding and reconciliation efforts directly and indirectly. The UK government has been funding this work through the Conflict, Stability, and Security Fund (CSSF) with nearly £2.5m of support since 2016.

“Sixty million peoplearound the world live in fear of landmines and unexploded bombs – with someone killed or injured every hour. Almost half are children.

“By visiting a minefield today the players are highlighting how this urgent issue impacts communities in Sri Lanka and around the world.

“Our target is to support Sri Lanka to become landmine free by 2020, so there will be no more minefields here to visit, and no more accidents and fear.”

This visit is being delivered in close coordination with the British High Commission in Sri Lanka, and will be attended by the High Commissioner, James Dauris:

“It’s hard for most people to imagine what it’s like when, every time you go for a walk or see your children playing with their friends, you worry that someone will get killed or badly injured. Yet this is what it has been like for years for all those people in Sri Lanka who live in areas where there are still landmines in the ground a decade after fighting ended.

“Everyone in the UK can be proud of the contribution we are making towards Sri Lanka becoming landmine free again. Clearing the land of mines means that local people can go back to living normal lives without having to worry all the time about the risks of a potentially fatal injury. This brave and painstaking work makes it safe for people to return to their homes and their fields, and allows communities to rebuild. It allows young people to come together and to play cricket without fear.

“I’m delighted that today’s visit by members of the England Cricket Team will raise awareness of the vital work that UK charities, including MAG and the Halo Trust, are doing in Sri Lanka with the support of the UK Government.”

The Mines Advisory Group (MAG) is a global humanitarian and advocacy organisation that finds and destroys landmines, cluster munitions and unexploded bombs from places affected by conflict.

MAG also provides risk education programmes, particularly for children, so people can live, work and play as safely as a possible until land is cleared.

Since 1989, MAG has helped over 18 million people in over 40 countries rebuild their lives and livelihoods after war.

In 1997, MAG shared the Nobel Peace Prize for its role in banning landmines.

The three-decade civil war which ended in 2009 resulted in large areas of both the northern and eastern provinces being widely contaminated with landmines and unexploded bombs.

October 15, 2020 byCharindra No Comments
The Ministry of Health has requested the University Grants Commission (UGC) to allow medical faculties of Sri Lanka to assist in conducting PCR tests.