Sri Lanka won the toss and chose to bowl in the first ODI of the series in Dambulla, with newly instated captain Dinesh Chandimal hoping for some assistance against the No. 1-ranked side from a “little bit of moisture in the wicket”. 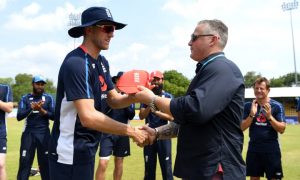 That meant England’s debutant fast bowler, Olly Stone, would have to wait to make an impact. Stone was picked as cover for Liam Plunkett, whose wedding clashed with the first part of the tour, and he comes straight into the side, along with Liam Dawson as England chose to field three spinners.

Eoin Morgan, England’s captain, hinted that Joe Root could have a bowling role, too. Like Chandimal, he said he would have preferred to chase. “Pitch looks good, probably not going to change much over the course of 50 overs,” he said.

With Chandimal taking charge for his first ODI since January, Sri Lanka included two other players who were not involved at the Asia Cup: Niroshan Dickwella, who dropped from their initial squad, and Nuwan Pradeep, the fast bowler who has recovered from injury. Lasith Malinga plays the third match of his comeback, while Akila Dananjaya and Lakshan Sandakan are the spin options at Chandimal’s disposal.

England have been short of match practice in the lead-up to the series, with their first warm-up match affected by rain and bad light and the second washed out entirely – meaning only the top four of Jason Roy, Jonny Bairstow, Root and Morgan have had any competitive time in the middle.

Tie against Afghanistan ‘will stay in our memories’ – KL Rahul