England’s World Cup hero Ben Stokes who ended New Zealand’s dream has been nominated for New Zealander of the Year. Yes, you read that right. 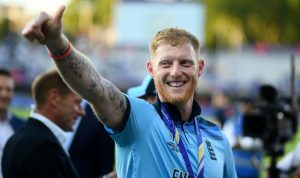 Stokes was born in Christchurch, but he later moved to the UK along with his family and forged a career with England

The official shortlist is yet to be made but the 28-year old all-rounder is an early contender among the public nominations with New Zealander of the Year Awards chief judge Cameron Bennet quoted on stuff.co.nz saying, “there’s clearly a few Kiwis about who think we can still claim him”. Stokes was born in Christchurch, but he later moved to the UK along with his family and forged a career with England.

New Zealand captain and the player of the World Cup Kane Williamson was also nominated for the award. “He’s been the embodiment of the qualities we cherish as New Zealanders – courage, fairness, humility,” Bennett said.

All New Zealand citizens over the age of 15 are eligible to be nominated. Film maker Taika Waititi and former All Blacks captain Ritchie McCaw are among the previous award-winners.

Stokes made 465 runs in the World Cup and was named Man of the Match in the final, where, outside of top-scoring with 84, he was involved in a very bizarre play.

It was the final over of the game and he was diving into the crease to complete a second run when he inadvertently deflected a throw from outfielder Martin Guptill to the third-man boundary. England were handed six runs, which raised questions about the laws of the game and set up the World Cup’s first Super Over. Stokes returned to bat in the Super Over and hit a crucial boundary against Trent Boult to help push England to 15. New Zealand, too, scored 15 in the Super Over, but England eventually won the title on boundary count.