Enough of history, where is herstory? 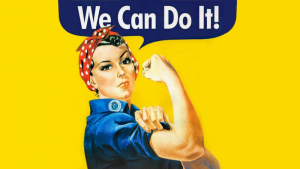 So SriLankan Airlines is in the news – again.

They are often in the news for financial mismanagement and massive losses through such mismanagement, but ask their former Head of Human Resources Pradeep Kekulawala about their problems and he would maintain it’s because of women – primarily women staffers being pregnant.

Gasp! The horror! How dare these women!

They are draining SriLankan Airlines of profits, apparently. Kekulawala actually had the nerve to say this when being pulled up by a presidential commission investigating an air hostess’ claims to the courts and media that she was terminated from her work for getting pregnant – which is illegal as per international labour laws as well as our own ones.

She also blew the whistle on the fact SriLankan Airlines had been discriminating them for years now and that several other air hostesses had opted to terminate their pregnancies rather than lose their jobs.

Kekulawala’s defence when he was pulled up by the commission was that SriLankan Airlines was losing money through pregnant air hostesses.

The sheer nerve of the likes of Kekulawala and co. defies belief – yet it happens again and again. As a woman of childbearing age myself, I know this first hand. Most companies are not stupid enough to have outright rules discriminating against pregnancy in the workforce – that is illegal as per our labour laws as noted earlier – but they do heavily discriminate against women of childbearing age in various ways.

We women in this age bracket are quite used to being treated as if there’s something fundamentally wrong with our bodies – for our capacity to birth the next generation and thus ensure the survival of the human race.

I happened to attend a May Day rally in Jaffna on 1 May. Many of the speakers talked extensively of the rights enshrined in Labour Day – including primarily that of the eight-hour work day.

At the beginning of the industrial revolution some 200 years ago, there had been little to no concept of regulated working hours; people were obliged to toil all their waking hours. This led to a massive toll on people’s health and life spans, which finally led to regulations worldwide – after much agitation at the cost of reprisals and even deaths from the workers themselves – for a regulated working day of eight hours. This eight-hour working day was based on the labour reforms proposed by early 19th Century British social reformer Robert Owen who posited that a 24-hour day ought to be split evenly for rest, recreation, and work – eight hours for sleep, eight for recreation, and eight for the work day.

Even as we celebrate this eight-hour work day every May Day now, and have been doing so for 132 years worldwide, there are many amongst us who do not enjoy such curtailed working hours still.

Can you guess the gender primarily affected? Yeah, no prizes, that was too easy.
At the May Day rally I attended, the organiser walked up to ask me if I would give an impromptu speech. There were no women speakers slated for the day.

Some might have been offended, but I saw this as definite progress. Where before, men felt perfectly comfortable having all-male panels (they still do), now at least they look around at the last minute and invite a token woman participant as well.
Not ideal I know, but I’ll take it.

So long as women’s voices continue to be shut out, no one makes policies that address issues we primarily face – such as domestic labour workers. Sri Lanka’s economy is primarily held up on the backs of the earnings of our housemaids – but no one has thus far bothered to look into regulating their working hours, at a policy level.

In the many Middle Eastern countries these women work in, they are allowed barely two to three hours of sleep per day, and have to work the remainder of their waking hours without rest. That totals 22 to 23-hour work days.

I interviewed some of these women for a series of articles on their work issues – many said they were not allowed to even sit in a chair, and if they sat on the floor for just a minute to catch their breath, they would be spurred on again with curses for sitting on the job.

Yet what have we done for them? As I made a point of telling the rally in Jaffna that day, it is no longer politically correct to call these women sustaining our economy “housemaids”.

Ok. Cool story. Domestic workers it is then. What are these domestic workers’ rights when it comes to their working hours, salaries, savings schemes, insurance, and bodily integrity (many are injected with forcible contraceptives before leaving)?

“Uh? What? No idea. The women manage somehow.”

Shrug. “No idea, we can’t afford to annoy the Middle East with too many demands. Just don’t call them housemaids.”

There! That ensures our collective policies in ensuring their worker contribution is recognised. End of story.

Oh no, wait, also ensure that they alone are responsible for their children, not the fathers. So if the fathers abandon their children, look the other way. If a mother leaves her children under five with her own mother or other trusted guardians, lay down the law.

Childcare is entirely her responsibility – and the State will step in to ensure that in a way it will not for fathers. Fathers can abscond their responsibilities all the time without either societal censure or government intervention. Mothers alone are responsible for their “bodily defect” in reproducing children.

Please note I am not being merely sarcastic here – this is actually held mainstream view in some strata of society. Husbands abandoning their families have been known to say “your body, your child”, as if they played no role in the children’s conception with societal acquiescence on the matter.

The women have imbibed the same patriarchal belief to such an extent that they rarely take the men to courts for childcare payments.

“I gave birth to the child, so it’s my responsibility. Why put up with the shame of asking handouts from a man who left?” they say.

Even if they do go to courts and win childcare, men easily abscond on payments, which the State will not intervene to the level it does for migrant women with young children wishing to go abroad. In those instances, various government workers at various levels will come zooming into the woman’s home on motorcades to ensure the child’s safety. The double standards are startling.


Women in the workforce

Despite all this and despite being dismissed as a liability to the economy because we reproduce, we women are at the forefront of ensuring Sri Lanka’s economic sustenance.

Three of the primary industries keeping us afloat – migrant workers, tea, and garments – are all women centric. On the backs of our labour, this country floats. Yet, where is the recognition? Where are the labour rules policing our working hours in any of these industries? Where is the fair pay? Where is our representation even in

May Day rallies around the country?

To this day, in rural areas, women are blatantly paid far less than men for the same work done – there is a concept of “men’s wages” and “women’s wages” operational in the country – with the premise that women should be paid only half that of a man.

Ask why, and rationalisations would come forth on women being the weaker sex, and men being the more dependable sex. Yet, even local surface-level research does not bear this out. I interviewed shopkeepers in Mannar town some years ago on why they were paying female shop assistants Rs. 6,000 and male ones Rs. 12,000. The rationalisations were that men could do heavy lifting and work longer hours. Yet, in many shops, the women and men were actually doing the same work over the same number of hours.

If the shops closed at 7 p.m., as they frequently did in that area, both men and women went home at the same time. Yet, the rationalisation was that men can work till 10 p.m. – not that they actually did.

Further questions to the shopkeepers on their level of satisfaction of the assistants’ work yielded even more interesting results. They said women were the more dependable workers. They were less apt to pilfer money from tills, not prone to taking extended smoke breaks, or disappearing on the job as some men were prone to do.
Thus overall, the shopkeepers reported better satisfaction with female workers, not male. Yet, women continue to be paid only half the labour wages men are, simply because they are a gender that can be exploited easily while being told their bodies and intellects are defective.

All this is not even taking into account women’s unpaid work at home – that is a topic that deserves a chapter on its own.

As noted Indian Feminist Kamla Bhasin said: “The day women’s unpaid work is accounted for, the biggest loot in human history will be exposed. That will be herstory.”

Because for now, history keeps airbrushing us out. Eventually, our time will come. One May Day at a time. With one last-minute intervention to allow a woman to speak. It will come.


(Thulasi Muttulingam is a freelance journalist based in Jaffna. All views expressed are her own and not of any organisations affiliated to her)

Constitution or people, which is supreme?

December 16, 2018 bythemorninglk No Comments
After several weeks of much debate, the closely followed Supreme Court case regarding the dissolution of Parliament by the President came to an end on Thursday evening.

The combat terrain is the mind

May 13, 2019 bythemorninglk No Comments
Brigadier Sumith Atapattu, Spokesperson for the Army, is a war veteran, presumably with some training in ideological warfare, as were some other Army spokespersons over the decades of the internal war