The environment is facing a serious risk due to multiple coal power plants being proposed, with the Cabinet already approving at least one of them, The Sunday Morning learnt.

Multiple coal power plants have been proposed in the newly drafted Long Term Generation Expansion Plan 2020-2039 of the Ceylon Electricity Board (CEB). 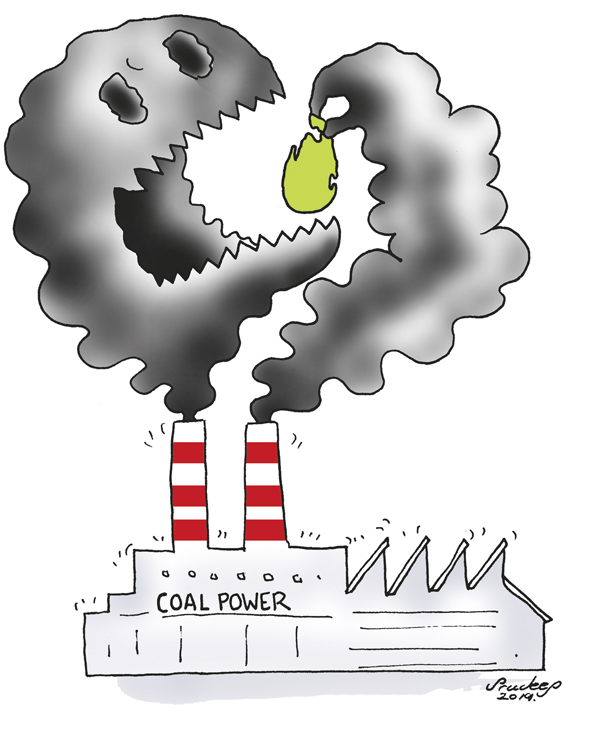 The new draft plan, which is currently being reviewed by the Public Utilities Commission of Sri Lanka (PUCSL), includes a proposal to extend the Lakvijaya Power Station in 2023/24.

Furthermore, two 300 MW high-efficiency coal power plants are expected to be commissioned in 2025 and 2028 in Foul Point, Trincomalee.

The Sunday Morning learnt that the Lakvijaya Extension Project, which is to be funded by China, similar to the previous units, has already received Cabinet approval.

However, the new addition to the existing coal power plant was not mentioned in the initial project and, therefore, the CEB would be able to proceed with the project only if environmental clearance is granted.

A cabinet proposal was submitted by Minister of Power and Energy Ravi Karunanayake, seeking the approval of the Cabinet to authorise the CEB to construct a fourth unit of 300 MW as an extension of the Norochcholai Coal Power Plant, using the same infrastructure in the same facility.

The proposal also seeks to request China to provide a concessionary loan facility directly to the CEB to meet 100% of the project cost to implement the project on a government-to-government basis, taking into account the fact that the existing three units of the power plant were funded by China.

It also directs the Treasury to appoint a cabinet-appointed negotiating committee (CANC) and a technical evaluation committee (TEC) to evaluate the technical and commercial proposals of the CMEC to make the recommendations to the Cabinet.

In order to reduce the high cost of power generation of the CEB and to cure the extremely unhealthy financial situation of the CEB as well as the Ceylon Petroleum Corporation (CPC), the fuel supplier, the CEB, proposed to develop an additional 300 MW coal power plant unit immediately as an extension to the existing power plant.

A senior official of the CEB, who wished to remain anonymous, told The Sunday Morning that even though the construction of the Norochcholai Coal Power Plant was economically and technically feasible, the environmental feasibility study had not been conducted so far.

Referring to the previous allegations levelled against the Norochcholai Coal Power Plant, he stated that the emission level of the power plant was currently lower than expected, but the environmental approval would be granted by considering the air quality and the maximum levels that it could possibly go to with the new plant.

Meanwhile, speaking to The Sunday Morning, a senior engineer of the CEB said the construction of a new 300 MW unit in Norochcholai would help the environment as it would then be possible to control the operations of the other three units.

“During the power crisis a few months ago, the CEB couldn’t stop the plant for repairs, and during that time, the plant started to release sulphur dioxide and nitrogen dioxide. But now, the situation is under control with the increase of hydropower generation,” he stressed.

However, justifying the construction of a new unit at the Lakvijaya premises, the Minister had stated that generally, the construction of a coal power plant takes at least five to seven years due to its time-consuming tasks such as land acquisition, resettlement and compensation, design, environmental approval process, other construction approvals, etc. An extension to an existing plant can be completed within two to three years within the same premises for a lower cost.

Since most of the existing infrastructure can be used commonly, the fourth unit can be built at a lower cost as well. The overhead costs of the proposed extension will also be at a minimum as the same trained staff and spare parts can be utilised commonly for all four units.

According to the CEB’s newly drafted energy plan, no coal plants were built until 2011 due to several environmental and social issues, and at present, a 900 MW coal power plant is in operation in Puttalam, which was built in two stages. Even though coal power is the cheapest after hydropower, the CEB has stated that recently, coal prices too have shown increased volatility.

When The Sunday Morning contacted PUCSL Director – Corporate Communications Jayanat Herat, he said the PUCSL was currently reviewing the newly drafted energy plan of the CEB.

However, as explained by CEB Engineers’ Union (CEBEU) President Eng. Anuruddha Thilakaratne, the new energy plan had been formulated to accommodate new developments to the country’s energy sector.

An energy expert, Dr. Priyantha Morapitiya said: “The country needs firm energy. Coal is a good least-cost, firm source of energy and not only Sri Lanka but most of the Asian countries are depending on coal power. Without coal power, we won’t survive in the future.”

When contacted, Ministry of Power and Renewable Energy Spokesman and Director – Development

Sulakshana Jayawardene said: “We didn’t receive a confirmed decision as yet.”

“Apart from the existing three units, there’s a plan to have an additional unit at Lakvijaya,” Jayawardene said, adding that it was approved some time back.

It was considered by the Cabinet Subcommittee and later, they had submitted a report to the Cabinet and it was approved in the first quarter of this year.

“We are supposed to get approval from the PUCSL, but this is also a part of the Long Term Generation Expansion Plan. According to the existing rules of the PUCSL, usually, before commencing the tender process after the Standing Cabinet Appointed Procurement Committee (SCAPC) grants its approval, it has to be referred to the PUCSL to get their concurrence before the call for tenders is published.

“Once the PUCSL approves it, we can invite the bidders to submit their proposals. After that, the TEC is supposed to evaluate it and submit it the SCAPC.
“Currently, we are in the process of identifying and acquiring lands; we are supposed to get a foreign consultant too. We still haven’t called for tenders,” he added.

Below are the non-committed coal power plants mentioned in the CEB’s newly drafted energy plan:

The Government of Sri Lanka (GoSL) and the Government of India (GoI) entered into a Memorandum of Agreement (MoA) in 2006 to develop a coal power plant in Trincomalee as a joint venture between the CEB and National Thermal Power Corporation Ltd. (NTPC) of India.

Several alternative sites were explored in 2008 under a strategic environmental assessment (SEA) for setting up the proposed power project in the Trincomalee region, and based on various techno-economic and environmental considerations, a site near Sampur village was identified for the feasibility study.Agreements for power purchase, implementation, land lease, and coal supply and agreements with the Board of Investment (BOI) were signed and the feasibility study of the project was completed. The environmental clearance was received and subjected to further studies.

The project had acquired around 500 acres for the implementation and consists of the main power block, a coal handling plant, coal storage yard, ash disposal system, seawater cooling system, other building facilities, and a green belt. However, the project was not granted approval by PUCSL in the Long Term Generation Expansion Plan 2015-2034, indicating the undertaking given to the Supreme Court in Case No. SCFR 179/2016.

The CEB completed the pre-feasibility study for a high-efficiency and eco-friendly coal-fired thermal power plant in Sri Lanka with the financial assistance of the New Energy and Industrial Technology Development Organisation (NEDO) of Japan, and the study was carried out by Electric Power Development Company Ltd. (J-POWER) in 2013 and 2014.

Under the above study, candidate sites were studied from the southwest to the south coast and in the Trincomalee Bay area considering technical, environmental, and social conditions. Finally, three sites in the southern coast, in the Hambantota Port area, and in the Sampur area in Trincomalee were selected as the most suitable sites for future coal power development.

In 2014, the feasibility study for the high-efficiency and eco-friendly coal-fired thermal power plant commenced under the same programme and the study was conducted for the site in the Sampur area in Trincomalee.

The high-efficiency and eco-friendly coal-fired thermal power plant equipped with several emission control technologies to reduce emission levels significantly was studied. The environmental impact assessment (EIA) of the proposed project was temporarily suspended due to the non-availability of the identified land for the power plant development.

However, an alternative area of land in Foul Point has been identified and the process of acquisition has been initiated. Necessary feasibility studies for the alternative land area are to recommence once the land acquisition is finalised.

Coal plants in the southern coast

Mawella Coal Power Development Project: The Mawella site was studied on a pre-feasibility level as a candidate site for coal power development, together with the other thermal options, in 1988. The study proposed 600 MW coal power plants at the site. Further, the aforementioned recent pre-feasibility study for a high-efficiency and eco-friendly coal-fired thermal power plant had also identified Mawella as a suitable candidate site for future coal power development.

March 1, 2020 bySarah Hannan No Comments
Residents of the Rajanganaya, Yaya 18 area in Anuradhapura recently raised concerns over 100 acres of land being allocated for an aloe vera plantation project in the Wilpattu buffer zone.

April 8, 2019 bythemorninglk No Comments
The public seems to have been severely inconvenienced by the prevailing power cuts and water cuts.