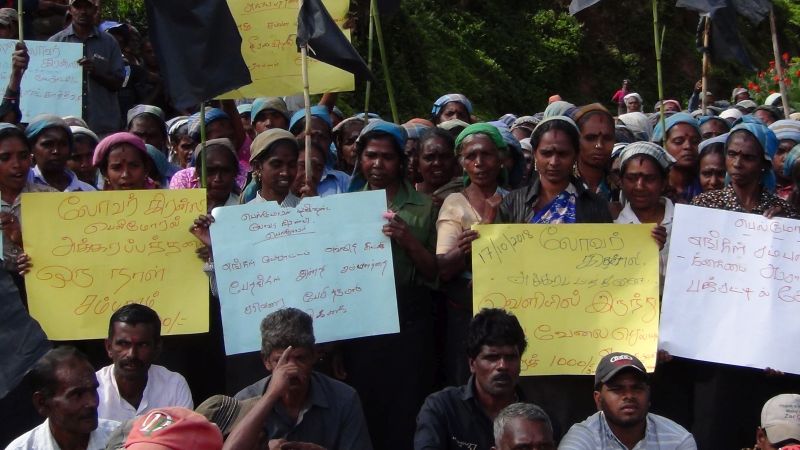 Workers at several estates have been protesting for days demanding Rs. 1,000 as their daily wage but the Government maintained that the demand was unreasonable and could not be met.

Minister of Plantation Industries Navin Dissanayake told The Sunday Morning that the unions were demanding a two-fold increase of their basic daily wage.

The Minister said that it was impossible to increase the daily wage from Rs. 500 to Rs. 1,000 as the cost of production, the price of tea, productivity, and profitability does not justify the demand.

He said that the companies have offered between Rs. 930-940 as an all-inclusive package and he was in talks with the companies to increase it to Rs. 950.

Not ready to back down

Ceylon Workers Congress (CWC) Leader Arumugan Thondaman said that unions were not prepared to agree on the package that was offered.

He insisted that before discussing an all-inclusive package, the unions wanted the basic wage to be increased to Rs. 1,000.

“Once the basic wage of Rs. 1,000 is agreed, we can discuss what else to add to the package,” he said.
Thondaman represented the unions at talks held last week with the companies to reach a settlement on the issue but the talks ended in failure.

Parliamentarian Vadivel Suresh, who also attended the talks held last week, said that the employers had offered Rs. 940 as an all-inclusive package but the unions were not prepared to accept it.

Hundreds of plantation workers took to the streets in Hatton, Talawakelle, and other areas last week to demand a pay hike.

In an attempt to defuse the tensions, a delegation led by Minister Mano Ganesan met President Maithripala Sirisena last week and discussed the issue.

State Minister of Education V. Radhakrishnan who attended the discussion, told The Sunday Morning that the President had instructed the Labour Ministry to work out a solution to the issue.

“Several proposals have been put forward to resolve this issue so we need to find the best solution. The President has instructed the Labour Ministry to speak to the trade unions and finalise a solution soon,” he said.

He said that while protests were still continuing over the issue, they hoped to resolve the matter soon.
The Planters Association of Ceylon said the current model on the wages cannot be sustained long term and the time had come to look at a different model based on productivity and a share of revenue.

Chairman of the Association S. S. Poholiyadde said that at the last revision, unions agreed to a productivity-based wage structure and also to look into a revenue share model which needed to be aggressively pursued for the sustainability of the industry.

The Planters Association said that during the latter part of the last financial year, tea prices had recorded a decline.

“There have been many reasons for the drop, starting with the issue we had with Russia, where they detected the larvae of a beetle inside a container which had not contaminated the tea, but they nevertheless declared a ban on the importation of Ceylon Tea,” he said at the Annual General Meeting of The Planters Association of Ceylon held earlier this month.

The matter was resolved after the Minister of Plantations sent a delegation headed by the former Chairman of the Sri Lanka Tea Board to Russia for talks.

“It was quite evident that the issue was not really pertaining to the beetle issue but rather due to an external trade issue which was totally beyond the control of the tea industry. We also have many trade issues, especially with Turkey and some other export destinations, with trade sanctions affecting the low grown leafy tea market.”

Poholiyadde said that the tea industry is now faced with a more serious issue with concerns, raised mainly by Japan, on the chemical residue levels in tea since the ban on glyphosate which came in as a surprise in March, 2015.

“Although two to three years have lapsed, we have neither been able to find nor had any recommendation for a substitute. The only available alternate weedicide is MCPA but Japan takes very strong exception to the use of MCPA and if any trace of this chemical is detected in the tea it will not be accepted by Japan. Although the companies agreed not to use MCPA since early this year, trace elements of this chemical it is still to be found in the tea,” he said.

The Chairman said that despite talks held with Japan to resolve the issue, they have been made to understand that unless glyphosate is made available to the growers in Sri Lanka, Japan might very soon lose the confidence they have in Sri Lanka and go for other origins for their purchases.

“In spite of the Minister making all efforts to have the ban on glyphosate lifted for specific use in tea and rubber plantations, the importation of glyphosate is being handled by the Petroleum Corporation and we are still to receive the first consignment. We do hope that this will be resolved by mid-October to avoid any further issues with regard to exports in the future,” he said.

Poholiyadde said that there is also a serious issue in protecting the current high yielding tea land. He said that all acquisitions are focused on these areas especially for housing, urbanisation etc., which have drastic impacts on tea production.

The other aspects, he says, are the worker shortage and the migration of workers. He said that he was glad that the many companies have taken the initiative to mechanise. Some companies have even undertaken trials with drones for spraying while many others have already implemented mechanisation of harvesting, pruning, and other agricultural practices such as draining, which are usually done by manual workers.

“Today, mechanisation is inevitable and the faster we move in that direction, the better for the industry. We are also thankful to the Chairman of the Sri Lanka Tea Board and his predecessor for taking the initiative to stop malpractices, including adulteration which is causing much damage to the image of Ceylon Tea,” he added.

September 29, 2019 byThe Sunday Morning No Comments
Last week, over a period of 48 hours, four districts received an incessant downpour which caused floods, affecting 112,845 persons, while in five districts, a total of 24,284 persons were affected