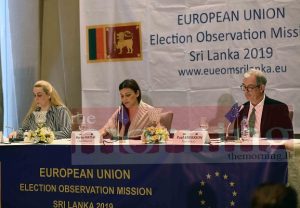 In its final report on the elections, released on Friday (24), the EU Election Observer Mission (EU EOM) noted that since an all-encompassing privacy and data protection legislation had not yet been enacted, political parties did not declare their use of voters’ data, which was collected by mobile applications such as the SLPP’s VCan app, or directly by campaign staff.

The 81-page report noted that extensive use of the VCan app and enclosed private information by SLPP campaigners was confirmed to EU observers in nine densely populated and fiercely contested districts.

Neither the Election Commission (EC) nor any other institution scrutinised developers of these applications (or the source code) for compliance even with their vague self-declared privacy policy, the report said.

“Such practices are at odds with international standards and leave voters exposed to unsolicited political propaganda,” the EU EOM said.

The observers also noted that social networks were used by a few social media influencers, online media sites, and vlogs to debate and scrutinise candidates, to analyse their manifestos, and to call for greater accountability of the EC, government, and the two lead campaigns.

Such activities contributed to transparency and strengthened the integrity of the election.

However, the EU EOM said that co-ordinated dissemination of outright false and/or demeaning information presented in various formats and across digital platforms dwarfed credible news threads.

The suppression of credible news entailed the use of sponsored content on Facebook and the co-ordinated sharing of political memes that sowed discord and political gossip. Both served as a source for multiple posts on political support group pages. In the majority of cases, the SLPP campaign benefitted from this.

Ten days before the election, the SLPP further skewed the online discourse by announcing a “sharing” contest for 50,000 subscribers of the SLPP app VCan.

By following the application, the EU EOM observed automated and concerted activities, including multiple sharing of the same post at odd hours (e.g. 3:30 and 4:22), but from different profiles, which also indicated the activity of bogus accounts.

June 19, 2019 byEaswaran No Comments
Five people, including four women, were killed following an accident involving a van and a tractor in Welikanda today.