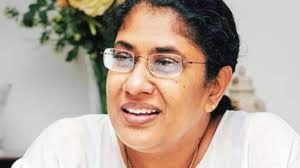 Atukorale was speaking at a press briefing held in Colombo today.

“I checked the recording a short while ago.We will launch an investigation on this recording. I cannot comment until the recording is authenticated. ”

She said if the leaked telephone conversation has been proved valid, she will write to the Attorney General Dappula de Livera for an explanation.

She declined to comment on further actions to be taken until the recording was proven valid.

November 21, 2019 byTSM Web Desk No Comments
Defense Secretary, Major General Kamal Gunaratne has assured that all arrangements have been made to maintain a peaceful environment in the country inline with the President's vision of have a country

October 23, 2019 byTSM Web Desk No Comments
The sister of Swedish national Yvonne Johnson, who was brutally murdered at the Royal Park Condominium in 2005, in a public statement on Facebook condemned President Maithripala Sirisena's decision to