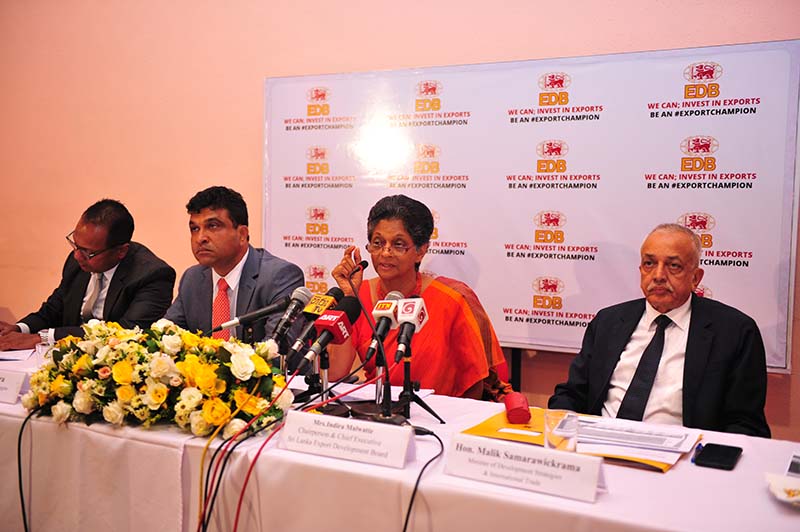 Sri Lanka’s export earnings in the first 6 months of 2019 surpassed US$ 8 billion, a record for the first half of a year, the Export Development Board announced today (23 July).

However, the full year target of US $ 20 billion appears increasingly unlikely, with EDB Chairperson Indira Malwatta saying that US$ 18.5 billion was a more realistic revenue target for the year at the halfway stage.

Minister of Development Strategies and International Trade Malik Samarawickrama addressing the event however was optimistic of reaching the target.

“The target set for 2019 is to achieve US $ 20 billion exports which I’m confident, with the Public and Private collaboration and strong commitment, is possible. My Ministry is totally committed towards working closely with the relevant Ministries, Departments, Chambers and Associations,” he said.

Samarawickrama made special mention of the contribution of the services sector to export revenue this year.

“I must particularly mention the contribution made by the export service sector with a growth rate of 27% to reach US $ 2,512 million during the first half of 2019 from US $ 1,980 million during the corresponding period in 2018,” he said.

He said the ultimate objective is to increase the country’s exports to US $ 28 billion by the year 2022.

The Export Sector contributed approximately 18% to the Gross Domestic Product [GDP] of the country in 2018.

Dialog Axiata PLC has appointed Dato’ Mohd Izzaddin Idris to its Board of Directors, as a Nominee Director of Axiata Group, with effect from 09th August 2018. Idris will act as a Non-Independent/Non-Executive Director, and by virtue of being a Nominee Director has a relevant interest in 6,785,252,765 (83.32%) ordinary[…]

CSE to open after a month-long closure on Wednesday

April 19, 2020 byCharindra No Comments
The Colombo Stock Exchange (CSE) will open for trading on Wednesday (22) after being closed for more than a month.