September 14, 2020 by themorningeditor1 liberty No Comments 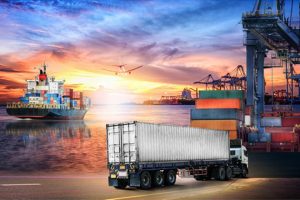 Sri Lanka’s exports during the month of August 2020 recorded a downfall of 19.2% to $ 947.7 million as compared to the value of $ 1,033.3 million recorded the same month of last year, the Export Development Board (EDB) announced.

Despite the decline in exports, some products like coconut-based products, electricals and electronic components, spices and essential oils, and food and beverages recorded a positive growth of 22.88%, 8.32%, 19.4%, and 11.45%, respectively, during the month of August 2020 as compared to August 2019.

EDB Chairman Prabhash Subasinghe said:” It is remarkable to see another month of almost a billion dollars of exports. However, we are being watchful of the months ahead whilst understanding the impact of Covid-19 on our key markets of the US and Europe. We also need to focus on export product and market diversification which is seriously lacking today. Whilst appreciating that the US and the EU are the largest markets, we need to now create a significant export market in Asia, including China. The China free trade agreement (FTA) will certainly help in this regard. Export product diversification must simultaneously happen so that we can create more billion-dollar industries for Sri Lanka.” 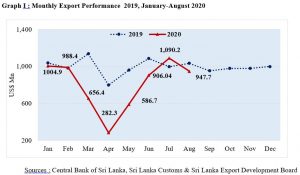 In addition, export earnings from rubber and rubber finished products have decreased by 2.71% year-on-year (YoY) to $ 72.53 million in August 2020, due to the bearish performance in exports of pneumatic and retreated rubber tyres and tubes, gaskets, washers, seals, etc. of hard rubber. However, exports of industrial and surgical gloves of rubber have increased by 36.19% YoY to $ 23.07 million in August 2020.

Export performance during the period of January-August 2020

Earnings from the export of Personal Protective Equipment (PPE)-related products increased by 38.32% to $ 541.94 million from January to August 2020, compared with the value of $ 391.79 million recorded in the corresponding period of the previous year. The strong performance was mainly due to the increased exports of other made-up articles (HS code 630790) and articles of apparel and clothing accessories of plastics (HS code 392620).

Further, exports to Italy, Canada, China, Japan, and Turkey have also shown better performance during the month of August 2020. Exports to China grew significantly by 34.47% in August 2020 led by earnings from the export of apparel, tea in bulk, and activated carbon.

June 10, 2019 bythemorninglk No Comments
Signalling a much needed reversal of fortunes for the tourism industry, two international airlines have formally expressed interest in commencing flights to Sri Lanka in the upcoming winter season.

July 8, 2019 bythemorninglk No Comments
The campaign Positive Sri Lanka is calling on businesses, big and small, to participate in generating positive momentum in the economy.