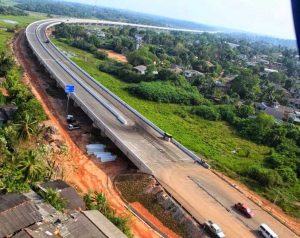 The Government is to suspend Phase III of the Central Expressway project and withdraw the contract offered to Japan, The Sunday Morning learnt.

Phase III of the Central Expressway project involves the construction of a 32 km stretch between Pothuhera and Galagedara.

Phase III had stalled after Japan placed strict conditions to fund the construction and with no consensus in sight, the Government decided to look elsewhere.

The Sunday Morning learnt that the failure to reach an agreement over the conditions imposed by the Japanese contractor Taisei Company had resulted in the Government deciding to withdraw from the deal.

Initially, the Government’s plan was to complete the construction of the entire Central Expressway Project (CEP), consisting of four phases at the end of 2019.

CEP Phase II is near completion and is likely to open to the public this year. However, the construction of Phase I slowed down due to delay in finalising loan agreements between Sri Lanka and China.

The construction of Phase III was delayed for almost four years as the two parties, Sri Lanka and Japan, could not agree on the conditions. Phase IV is to be constructed by China but the agreement has not yet been signed.

Speaking to The Sunday Morning, Highways and Road Development and Petroleum Resources Development Minister Kabir Hashim said that the conditions imposed by Japan were tough and some of those conditions were not in line with the laws of the country and therefore, the Attorney General’s Department refused to accept those conditions.

According to the Minister, the term of the contract for Phase III of the project ended on 4 March.

“The Japanese Ambassador was also involved with the discussions but we could not reach a final agreement as yet. They have amended most of the clauses. We have also been flexible and we expected them to be flexible as well,” he said.

“We need to get the third section started. If the agreements are not finalised within the next couple of days with consent of the AG’s Department, then I would definitely take some hard decisions. Because there is a critical interchange coming there. We can’t delay the construction of the interchange,” the Minister stressed.

SLPP will not back Sirisena as President

June 9, 2019 bythemorninglk No Comments
The Sri Lanka Podujana Peramuna (SLPP) will not support President Maithripala Sirisena as the next presidential candidate.