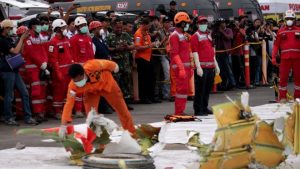 Relatives of people killed in the Boeing 737 Max crash in Indonesia last year have been cheated out of compensation, their lawyers say.

Lawyers told the BBC that many families were persuaded to sign forms preventing them from taking legal action.

BBC Panorama has discovered that other relatives signed similar agreements after two other crashes, stopping them from suing Boeing in the US courts.

All 189 passengers and crew died when the Boeing 737 Max crashed into the sea just 13 minutes after taking off from the Indonesian capital, Jakarta, on 29 October 2018.

Within weeks, relatives were offered compensation by insurance lawyers.

To access the money, families had to sign agreements that would prevent them from taking legal action against Boeing or the airline, Lion Air.

Merdian Agustin’s husband, Eka, was killed in the crash. She says the insurance lawyers tried to pressure her into signing away her rights.

“They said you should sign this. You should move forward. In one hour or two hours you will get the money and you will continue life, but I don’t want it. It’s not about the money. It’s about my husband’s life”, she said.

The payouts are controversial because under Indonesian law the families are automatically entitled to £71,000 compensation.

Sanjiv Singh, an American lawyer representing some of the families, told the BBC relatives had been pressured into signing away their legal rights.

“The families who signed the release and discharge [documents] have been cheated out of compensation, they’ve been preyed upon by insurance companies and by the counsel for those insurance companies, and ultimately, to the benefit of Boeing” he said.

He added that families were potentially entitled to millions of dollars in compensation.

This is not the first time that Boeing has benefited from controversial release and discharge documents.

In 2005, a Boeing 737 crashed into a residential area in Indonesia, killing 149 people. Families signed agreements which prevented them from suing Boeing in the US courts. Similar agreements were signed after a 737 crash that killed 102 passengers and crew in 2007.

One unnamed insurance lawyer was involved on all three occasions.

Mr Singh says this raises serious questions about whether Boeing was involved in the more recent Lion Air agreements.

“I think that makes it implausible that Boeing, at the very least, didn’t know that the releases were being collected. I think it raises a very significant question as to whether they co-ordinated it.”

Panorama asked Boeing if it knew about the agreements or had any communication with the insurance lawyers who helped organise them.

Boeing did not answer any of the questions posed by the Panorama programme, instead releasing a statement which said: “Boeing truly regrets the loss of life and will continue to work with communities, customers and the aviation industry to help with the healing process.

“The insurers for Boeing are in discussions with other insurers around the world, as is typical and customary in circumstances such as these.”

The lead insurer for both Lion Air and Boeing is the British insurance firm Global Aerospace.

Global Aerospace disputed the allegations but declined to comment on the specifics because of client confidentiality.

It said: “It is common for aviation insurers to have insured more than one party that is involved in some way in an accident.

“Global Aerospace, in accordance with industry best practice, strictly divides responsibility for the handling of different clients to ensure that they are each represented separately and that no inappropriate sharing of information takes place in the handling of any claims that may occur.”

The company said it was standard practice when settling claims to release the airline and plane manufacturers from future claims.

On 3 July, Boeing announced it would provide $100m to help communities and families affected by the two recent 737 Max accidents. The second was in Ethiopia in April, when 157 people died.

Lawyers for the families say they have not been given details about how that money would be used. BBC

August 2, 2019 byTSM Web Desk No Comments
Six explosions, believed to be the result of homemade bombs set off by timers, injured at least three people in Bangkok on Friday (1).

October 23, 2018 byMalik No Comments
A senior US official has held talks with Saudi Arabia's crown prince in Riyadh, despite growing concern over the Saudis' role in the murder of journalist Jamal Khashoggi.