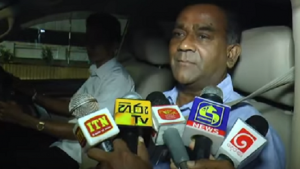 The final decision on the swan symbol will be taken on Sunday (1), according to former UNP General Secretary Tissa Attanayake.

Attanayake was speaking to reporters yesterday(24) following a meeting held to discuss the election campaign of the Samagi Jana Balavegaya.

He said the ‘New Democratic Front’,  will convene on Sunday (1 March) to take a final decision on whether it will grant permission to the Samagi Jana Balavegaya to use its swan symbol.

“The New Democratic Front will discuss the matter and inform the alliance of the decision.”

“The Election Commission can formally announce the swan symbol once the gazette declaring the election has been issued,” Attanayake added.

He said even though there were varied view points on the symbol, all members would eventually come to an agreement for the sake of the UNP- led alliance.

May 8, 2020 byTSM Web Desk No Comments
All cases in the District Court of Colombo which are scheduled to be taken up on Monday the 11th May 2020 have been postponed.

March 6, 2019 byRandev No Comments
New evidence has been unearthed against former DIG Nalaka De Silva by the Criminal Investigations Department (CID) into the alleged plot to assassinate President Maithripala Sirisena and other VIP's.