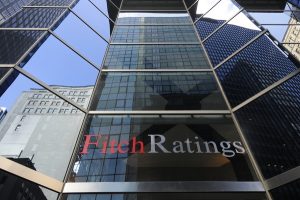 Fitch Ratings has downgraded Sri Lanka’s Long-Term Foreign- and Local-Currency Issuer Default Ratings (IDR) to ‘B-‘, from ‘B’. The Outlook is Negative.

Sri Lanka’s reserves are about USD7.2 billion, while the sovereign’s external debt payments from May to December 2020 amount to USD3.2 billion, including a USD1.0 billion international sovereign bond payment due in October. Fitch estimates Sri Lanka’s external liquidity ratio, defined as liquid external assets/external liabilities, at about 64%, among the weakest in the ‘B’ rating category.

“The authorities are seeking to meet external funding needs in 2020 through multilateral and bilateral support, but securing these funds could be challenging due to the pandemic and its effect on global liquidity and financing conditions. Our projections assume the sovereign will not have access to international bond markets in 2020. Fitch understands that the government is in discussion with various parties, including regional central banks on the use of possible bilateral swap lines and the IMF on its Rapid Financing Instrument for Covid-19-related funding. However, even after such support, the country’s FX debt service obligations and financing challenges will remain substantial over the medium term. Official figures suggest roughly USD 13.8 billion of FX debt will come due over 2021-2023.”

Fitch expects the budget deficit to widen to 9.3% of GDP in 2020, from an estimated 6.8% in 2019. This is weaker than the authorities’ forecast of 7.5%, and Fitch attributed this to its expectation of significantly lower revenue due to the impact of the pandemic on economic activity and the spillover of tax cuts announced late last year. It added that authorities may need to increase spending over time to support the economy, although they have yet to formalise any large scale measures beyond 0.2% of GDP for relief to vulnerable groups.

Fitch forecasts GDP to contract by 1.0% in 2020, from 2.3% growth in 2019, on account of the pandemic. Sri Lanka has so far recorded a relatively small number of coronavirus cases, and authorities have begun to loosen lockdown restrictions.

“Nevertheless, private consumption, which makes up almost 70% of GDP, is likely to stay muted as a result of partial lockdowns, domestic travel restrictions, and other social distancing measures. Travel and tourism, which the World Bank says accounts for 12.5% of Sri Lanka’s GDP, will be particularly hard-hit, with commercial flights into the country suspended. We expect GDP growth of 4% in 2021 on the basis of a gradual recovery in tourism receipts beginning in late 2020. However, this forecast is subject to an unusually high degree of uncertainty and downside risk, depending on the evolution of the pandemic both within Sri Lanka and globally.”

Fitch said the Negative Outlook reflects its view that risks are skewed clearly to the downside. The central bank has responded to market pressures by ensuring liquidity and allowing the currency to adjust, thereby protecting reserves.

“Nevertheless, capital outflow pressure and market refinancing risks remain in the current risk-averse environment. The potential for an economic recovery in 2021 hinges on an early return of tourism receipts and increasing domestic activity, which is highly uncertain and is dependent on the course of the pandemic. A second wave of infections that prompt further periodic lockdowns would result in weaker GDP for 2020 and 2021.”

Fitch said the ‘B-‘ IDR also reflects the key rating drivers such as the delay in holding the election.

“Parliamentary elections set for April 2020 have been postponed because of health concerns from the pandemic and have been provisionally rescheduled for June, but the timing could be further delayed as circumstances warrant. The delay has prolonged policy uncertainty. This, in turn, has made it difficult to complete the seventh and final review under the IMF Extended Fund Facility arrangement. Discussions over a new arrangement may be possible only after the parliamentary elections and once next year’s budget is approved. The discussions could also be complicated by the challenge of reaching an agreement on policies to place Sri Lanka’s public finances on a sustainable path,” Fitch noted.

It believes a decline in tourism, lower remittances, and weaker exports are likely to widen the current account deficit to 3.3% of GDP this year – despite some relief from lower oil prices – from 2.2% in 2019, before narrowing to 2.3% in 2021, in line with Fitch’s expectations for a gradual recovery in the global economy.

Large interest payments as a share of revenue of around 65%, according to Fitch estimates for 2020, a low fiscal revenue ratio and high public debt/revenue ratio continue to highlight the weak structure of Sri Lanka’s public finances. The government debt/revenue ratio was about 690% in 2019, significantly higher than the ‘B’ median of 258%. FX debt continues to be about half of total government debt, leaving Sri Lanka’s public finances vulnerable to renewed currency depreciation.

Fitch was complementary towards Sri Lanka’s basic human development indicators, including education standards, which are high compared with the ‘B’ and ‘BB’ medians, based on the UN Human Development Index Score, which positions Sri Lanka in the 60th percentile, well above the 37th percentile for the ‘B’ median. The country’s per capita income of USD 3,939 at end-2019 is also modestly above the ‘B’ median of USD3,335.

Fitch’s banking sector outlook was revised to negative in March, reflecting a more challenging operating environment due to the pandemic, which has pressured banks’ asset quality and profitability. Demand for credit is likely to remain muted in 2020 due to the weaker growth outlook, it said. Authorities took a range of measures since the Easter terrorist attacks in 2019 to accelerate loan growth, including lending rate caps and policy rate cuts totalling 100bp, but Sri Lanka’s gross loans rose by just 5.6% in 2019, the slowest rate since 2009.

April 8, 2020 byCharindra No Comments
Softlogic Holdings PLC today (08) implemented salary reductions of all employees with a salary of Rs. 50,000 or above for a period of three months, The Sunday Morning Business learns.

January 22, 2020 byCharindra No Comments
The Airport & Aviation Services in Sri Lanka (AASL) is offering a host of incentives to international budget airlines to fly to the Ratmalana and Mattala Airports.