SL women’s cricketers are ‘sold’ Down Under 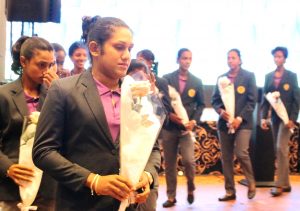 A new method of exploitation is now being reported in Australia. The latest victim of this cunning design was the Sri Lanka women’s cricket team which toured there for the 2020 ICC T20 World Cup.

This novel exploitation takes place in the guise of felicitation ceremonies for the Sri Lankan delegates visiting Australia, representing various fields like arts, culture, and sports. Sections of the Lankan migrants based mostly in Melbourne and Sydney purposefully generate money –by means of gate collection and souvenir auctions– by organising farce felicitation ceremonies. They share profits within themselves after those events.

The Lankan women’s cricketers underwent a similar phony felicitation, organised not to benefit either the team or Sri Lanka’s cricket but the very organisers of the event, this time in Melbourne before the start of the World Cup.

The show was attended by the Lankan squad including skipper Chamari Atapattu, who is extremely popular in Australia mainly due to her Women’s Big Bash League appearance there, and the event’s local attendees were given an opportunity to meet the team.

Interestingly, the ‘show’ has been priced at about Australia $ 200 (approximately Rs.10,000) per person. Further a bat autographed by the Lankan team has been auctioned at that event at a hefty amount. The most fascinating happening is that the funds collected in such ways have allegedly been shared by the main organisers of that hastily arranged occurrence.

One of the participants of this event told ‘The Sunday Morning Sports’ that ‘displaying’ any popular Sri Lankan delegation to the Melbourne migrants is a great means of making easy bucks for a certain organised section living there.

“It would have been ideal if those funds were utilised for charity. They should have sent those money for the development of the game back in Sri Lanka,” he said on the condition of anonymity.

Having realised the actual cunning logic behind the said ceremony, some of the leading women’s players were heard saying that day, “Meyala apiwa wikunagena kanawa” (These people are exploiting us).

“This happens not only for our cricketers but four artistes as well. It is very bad to make use of our own countrymen for making cheap money when they are here at alien shores. Our migrants have a responsibility to look after them free of charge. It’s our culturally bound practice. That’s how it happened when our national (male) team visited here before the 1996 World Cup win. They were not much popular then and were not sellable as they are today. We used to look after them by putting up them at our own houses,” recalled our source in Melbourne.

“It is the responsibility of the Lankan authorities to stop this happening. It may happen not only in Australia but anywhere in the world nowadays. A manager is going with every team. Why they are not reporting these malpractices to the cricket board in Colombo is the problem.”

Johnians win Battle of the North

January 27, 2020 byRevatha No Comments
This time the much anticipated Bradby Shield rugby games between Royal and Trinity will be played on a different schedule

Paraguay teens too much for Lanka