• Levels to stabilise by mid-February

According to the air quality forecast for Colombo by AirVisual.com, air pollutant levels will reach the “unhealthy for sensitive groups” level (101-150) on 27-29 January, with the forecast for 30-31 January forecasts a moderate-level (51-100) reading. These levels are measured as per the Air Quality Index (AQI) developed by the US Environmental Protection Agency (EPA).

In a situation the AQI readings reach the level of being unhealthy for sensitive groups, the Ministry of Health advises children, the elderly, persons with chronic heart and respiratory disease, and pregnant women to limit outdoor activities, keep the windows of your house closed, and wear a surgical mask when venturing outdoors.

The World Health Organisation (WHO) recorded that ambient air pollution resulted in an estimated 4.2 million deaths per year globally due to stroke, heart disease, lung cancer, and chronic respiratory disease, with the greatest toll reported from the Western Pacific and Southeast Asia regions.

Sri Lanka’s interest in air quality was sparked after the AQI reading for Colombo reached 167 on 5 November 2019. Since then, a team of scientists from the Environmental Division of the National Building Research Organisation (NBRO) closely monitors the changes in the atmosphere surrounding Sri Lanka and collect air quality data for further analysis to monitor any significant changes to alert the relevant agencies.

On Friday (24), the AQI reading for Colombo stood at 119 PM2.5 (fine particulate matter). While the general public was not likely to be affected, there was a high chance for people in sensitive groups to experience irritation in their respiratory system and experience breathing difficulties.

“These days, there is a considerable level of air pollutants in the atmosphere, above all countries, in the South Asian region. With the north-eastern monsoon still in effect, more air pollutants are pushed towards the atmosphere above Sri Lanka,” NBRO Air Quality Unit senior scientist H.D.S. Premasiri informed The Sunday Morning.

Premasiri stated that vehicle and factory emissions were contributing factors towards the increase in air pollutants, and densely populated cities such as Colombo, Kurunegala, and Kandy were considered to experience air quality fluctuations throughout the week.

“The situation will continue till mid-February and we will experience a fluctuation in ambient air quality. We were expecting to see an increase of air pollutants on Thursday (23), but due to changes of wind patterns over the Bay of Bengal, we had air quality at a moderate level,” Premasiri added.

A quick glance at the South Asian region indicates that Sri Lanka’s average AQI readings are at a moderate level (51-100) in comparison to other countries in the region which are consistently on the unhealthy for sensitive groups level (101-150) or unhealthy level (151-200). 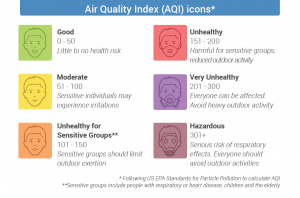 The quality of air of our atmosphere is determined by the density of particulate matter (PM) present in the air. PM is a pollutant made by combinations of dust, dirt, soot, smoke, and liquid droplets. Particles between 2.5 and 10 microns are considered coarse particles (PM10). These can cause health concerns since they are small enough to be inhaled and can accumulate in the respiratory system. Particles less than 2.5 microns are referred to as PM2.5 and can cause a greater health risk than PM10, as they can reach deeper into the lungs. PM10 particles come from crushing or grinding operations and dust from construction or unpaved roads. Fine particles of PM2.5 are produced from combustion activities including wildfires, power plants, some industrial processes, motor vehicles, and wood burning such as fire stoves.

In Sri Lanka, the ambient air quality is regulated under the National Environmental Act and according to the schedule published under gazette extraordinary No. 1562/22 of 15 August 2008, the maximum permissible level for particulate matter with an aerodynamic diameter less than 2.5 µm in size (PM 2.5) for a 24-hour time period, is 50 micrograms per cubic metre of air and annually should stand at 25 micrograms per cubic metre of air.

March 15, 2020 bySarah Hannan 1 Comment
Humans ingest microplastics when they consume foods such as shrimp, prawns, crabs,.. and on average, people would consume about 5 g of plastic per week through various food sources and drinking water.

February 10, 2019 bythemorninglk No Comments
. Missions in Dubai and Abu Dhabi involved in talks to get Madush to SL
. PNB unaware of stint; doubts if STF was involved in the arrest