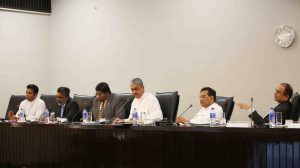 “This way, you may be able to find out who is behind the attacks,” he said.

He said that such a list could reveal the foreign powers behind the attacks.

“If investigators examine the list of names of the guests at Taj Samudra Hotel on Easter Sunday morning, it would be easy for them to understand the complete and true picture of the foreign powers and forces that orchestrated the attacks,” Jayasekara said.

He said that a probe into the guest list of Taj Samudra Hotel could lead the investigation in the right direction, instead of a political drama leading it in another one.

“All 225 MPs are being accused of knowing about the attacks beforehand. It is not so. For example, my security officers had not warned me. Similarly, not all 225 MPs knew about it. I believe that this Committee should pay attention to why and how only one five-star hotel had been exempted by the Easter Sunday attackers. That was a question. It was said that Taj Samudra Hotel had been excluded by the bombers because there were some powerful foreigners and local politicians staying at the hotel at the time. I think the PSC should investigate that,” Jayasekara said.

Then, MP Field Marshal Sarath Fonseka questioned the remarks made by Jayasekara during the PSC hearings. Following is an excerpt of the exchange:

Fonseka: I saw that you had stated to the media that the attack was known to you and you also knew those who had prior knowledge. Is that right?

Jayasekara: The attackers had caused explosions in three other five-star hotels. We saw in the media, in the aftermath of the attacks, images from CCTV footage showing how one suicide attacker came to the hotel but then changed his mind and left the hotel premises, and exploded himself later in Dehiwala.

Fonseka: So there are two conclusions. Either the bomb trigger failed or the attacker had been given instructions not to explode the bomb there. Is it so?

Jayasekara: I am not coming to any conclusions. It is you who is coming to conclusions and forcing them on me.

Fonseka: So the bomb did not explode in Taj Samudra Hotel because of the persons who lodged there?

Jayasekara: All I am asking the PSC to do is get the list of the names of persons who stayed in the hotel on that unfortunate day and the previous night. You could get the names of the people who stayed and the names of their suites and rooms. You could ask for the names of those who had breakfast there that day. This is a country which is highly manipulated by foreign forces. The country’s agenda is set and enacted by foreign powers. That is the truth. So I believe that Zahran was controlled by some foreign powers. Zahran and his team had been made use of by a foreign power which dictates the political agenda of this country, to force a political change here. 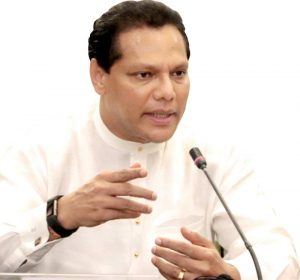 At this point, MP Rauff Hakeem pointed out that there were doubts about ISIS connections to the attack and queried Jayasekara on his views, stating: “Yes, there are some doubts regarding the connection to ISIS. There were reports of some Lankans who had gone to Syria to be trained by ISIS and then, there are new reports surfacing that ISIS did not know of the attack and accepted the responsibility several days after the attack, that too after a request from a very powerful person in Sri Lanka for ISIS to do so, according to the reports. What have you to say about this?” Hakeem questioned.

Jayasekara, agreeing with Hakeem’s remarks, said that an investigation into the individuals who stayed at the hotel would reveal all.

“I am saying the same thing. Only now, certain matters are coming out and we are getting certain information. The attack had been attributed to ISIS and there was an attempt to instigate the Sinhalese against the Muslims. I am asking you only to inquire who had been in Taj Samudra Hotel during that weekend so that this investigation would be meaningful; so that you could find who was behind the attacks,” Jayasekara responded.

Then, MP Dr. Jayampathy Wickramaratne demanded to know of the country that Jayasekara was indicating as being behind the attacks, while MP Prof. Ashu Marasinghe wanted to know if Jayasekara had divulged the same information to the National Security Council. Excerpts of the exchange follow:

Dr. Wickramaratne: So, you cannot name the country and have no intention of doing so?

Jayasekara: No, I still cannot do that. It is the duty of the security and intelligence establishments to conduct investigations and find the truth.

Prof. Marasinghe: You attended a National Security Council meeting after this attack?

Prof. Marasinghe: Did you raise these issues there, at the National Security Council meeting?

Thereafter, Fonseka questioned from where foreign funding for the attack had originated. “You say that a foreign power was behind it. You state that funds had been pumped and assistance had been given by a foreign country. Could you name it if you know it?”

Jayasekara, while refusing to name any single country, said that investigations should “follow the money trail” which would reveal the country, hinting that the funds could have even come from Indian Oil.

“Follow the money trail. You could then find how Zahran and many others in his Thowheed Jamath received funds for years as per police investigations. You can easily find out. You could investigate where those funds came from, and whether it had been dollars or had been from Indian Oil,” he said.

Next to testify before the PSC were senior officials of the Ministry of Education who clarified to the Committee that Islamic school textbooks did, in fact, stipulate the death penalty as punishment for those offending Islam.

Both Ministry of Education Secretary M.N. Ranasinghe and the Commissioner General of Educational Publications Jayantha Wickramanayake testified before the PSC.

Wickramanayake told the PSC that it had been stated in the textbooks that if Islamic punishments were implemented, there would be a decrease in crimes.

PSC Chairman Deputy Speaker Ananda Kumarasiri questioned whether the content in the textbooks was translated from an Arabic book or if it was the opinion of those who had compiled the textbooks.

Wickramanayake replied that the textbooks were compiled by panels of editors and a board of advisors.

“They are experts and university professors in Islam,” Wickramanayake said.

“After 2013, that punishment was excluded from the school textbooks,” he asserted.

Zahran evaded arrest in the past

The third witness for Wednesday’s PSC sitting was Eastern Province Senior DIG (SDIG) Kapila Jayasekara, who admitted that there had been security lapses which had allowed the terror attack to take place.

Kumarasiri, pointing out that both the former OIC and the current OIC of Kaththankudy had testified before the PSC that they had not received police intelligence reports on the attacks, questioned the SDIG whether he had received any such reports.

SDIG Jayasekara said that he had not received such intelligence reports. Following are excerpts of the exchange:

Fonseka: Did you know that there was a warrant for the arrest of Zahran?

SDIG Jayasekara: Yes. The warrant had been issued before I assumed duties there. I assumed duties in August 2017. By that time, he was involved in some clashes and was evading arrest. We used to conduct monthly intelligence review meetings of the Province. There were no reports. Relative peace was prevailing in the area.

Fonseka: So you considered him just another person with a warrant against him who was absconding arrest?

SDIG Jayasekara: Yes. The intelligence reports from the Province did not indicate such attacks. We discuss four topics at those meetings. Of them, national security is only one. There was no information warning of Zahran’s attacks.

At the conclusion of the Committee sittings, Kumarasiri said that senior intelligence officials had been asked to appear before the PSC on 24 July.

“They had originally been informed to appear before the PSC on Friday (12), but the session has been postponed as some officials were abroad and had prior engagements with the National Police Commission,” the Chairman said.

“Committee sittings are expected to begin at 9.30 a.m., but are unlikely to be open to the media,” the Chairman said, adding that audio recordings of the session would be handed over to the media afterward.

January 7, 2019 bythemorninglk No Comments
A recent accident involving an elevator at a building in Nawam Mawatha, Colombo has raised serious concerns over the safety of elevators installed in public buildings.

Lack of monitoring vs. loopholes in laws

August 19, 2019 bythemorninglk No Comments
Minister Vajira Abeywardena raised many eyebrows in Sri Lanka after he recently claimed that there was no proper mechanism to monitor non-profit organisations, especially their fund inflow.