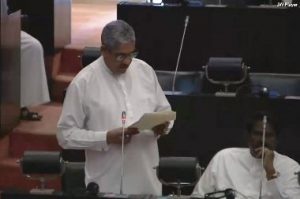 Speaking at the parliamentary session today(7), Fonseka said that Sallay’s ethnicity would affect his work as head of SIS.

“Brigadier Suresh Sallay is a Muslim. How can a Muslim be appointed as the SIS Head? We are fighting Islamic terrorism and there is conflict of interest here.”

President Rajapakse for the first time appointed a military officer to head the SIS.  Sallay is the former Head of Military Intelligence. SIS previously operated as part of the police department.

Fonseka speaking further said a minimum of 10 years is required to bring the SIS to international standards.

“Rajapakse says he has already restructured the SIS. A person with a sound understanding about national security will know that it takes a great deal of time, ” Fonseka pointed out.

March 12, 2020 byTSM Web Desk No Comments
The government has requested the public not to engage in overseas tours unless and otherwise it is absolutely necessary, the Government information department said today.