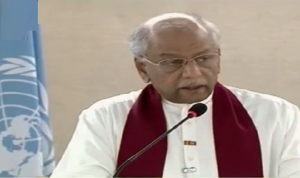 Foreign Minister Dinesh Gunawardena Addressing the 43rd session of UNHRC in Geneva announced that Sri Lanka will withdraw from the co-sponsorship of UN Resolution 30/1 and proposed to address accountability and reconciliation  through a domestic process.

“The Government of Sri Lanka will withdraw its co-sponsorship of Resolution 40/1 of March 2019 on ‘Promoting reconciliation, accountability and human rights in Sri Lanka’, which also incorporates and builds on preceding Resolutions 30/1 of October 2015 and 34/1 of March 2017,” Gunawardena said.

In spite of withdrawing from co-sponsorship of this Resolution, Gunawardena said Sri Lanka remains committed to achieving the goals set by the people of Sri Lanka on accountability and human rights, towards sustainable peace and reconciliation.

“The Government of Sri Lanka declares its commitment to achieve sustainable peace through an inclusive, domestically designed and executed reconciliation and accountability process, including through the appropriate adaptation of existing mechanisms, in line with the Government’s policy framework.”

He said this would comprise the appointment of a Commission of Inquiry (COI) headed by a Justice of the Supreme Court, to review the reports of previous Sri Lankan COIs which investigated alleged violations of Human Rights and International Humanitarian Law (IHL), to assess the status of implementation of their recommendations and to propose deliverable measures to implement them keeping in line with the new Government’s policy.

“Secondly, the Government will also address other outstanding concerns and introduce institutional reforms where necessary, in a manner consistent with Sri Lanka’s commitments, including the 2030 Sustainable Development Agenda (SDGs). We will implement policies rooted in the Government’s commitment to the people by advancing individual and collective rights and protections under the law, ensuring justice and reconciliation and addressing the concerns of vulnerable sections of society. A discussion has already been held between the President and the UN Resident Coordinator where it has been agreed to connect the relevant UN agencies to help the Government of Sri Lanka in the implementation of the SDGs.”

“Thirdly, Sri Lanka will continue to remain engaged with, and seek as required, the assistance of the UN and its agencies including the regular human rights mandates/bodies and mechanisms in capacity building and technical assistance, in keeping with domestic priorities and policies.”

“Finally, in conjunction with all members of the UN, Sri Lanka will seek to work towards the closure of the Resolution.”

April 19, 2020 byTSM Web Desk No Comments
Despite health authorities continuing to discover Covid-19 patients on a daily basis, the Government will relax curfew restrictions in Colombo from Wednesday (22) onwards, bringing an end to the month

No fraudulent activity in bidding for LNG power plant – Ministry

February 16, 2019 byRandev No Comments
No fraudulent activity has been carried out in the bidding for tenders of the construction of the LNG power plant in Kerawalpitiya the Ministry of Power, Energy and Business development said