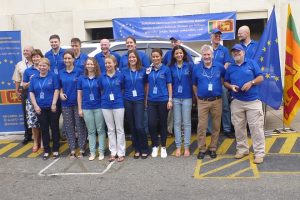 Election monitors from several countries have been invited for the upcoming presidential election. The European Union (EU) said that EU election observers are expected to monitor the election and that they were awaiting a formal invitation from Sri Lanka.

“We have been given the indication by the Elections Commission (EC) that EU monitors will be invited to monitor the pre-election and election day activities once the election is declared,” EU sources said.

Election monitoring group the People’s Action for Free and Fair Elections (PAFFREL) have already begun gearing up for the upcoming presidential election with plans to deploy some 10,000 election observers.

PAFFREL Executive Director Rohana Hettiarachchi told The Sunday Morning that they had already started making arrangements for the presidential election.

“We are getting ready for the election. We don’t expect much election violence, if at all. Nevertheless, we will be deploying around 10,000 election observers,” he said.

In addition, PAFFREL has also taken steps to invite international election monitors in co-ordination with groups such as the Asian Network for Free Elections (ANFREL) based in Bangkok, Thailand.

“We have invited a number of foreign election monitoring groups and expect around 25 observers to come from ANFREL,” he said.

Furthermore, a local youth network of 3,000 volunteer election observers would also be active during the election period.

“We have trained some 3,000 youth as citizen observers. They will engage in monitoring and observation of election activities in the localities as volunteer groups and report to us,” Hettiarachchi said.

October 11, 2018 byEaswaran No Comments
US Principal Deputy Assistant Secretary Alice Wells says that the US will provide US$ 39 million to support Sri Lanka’s maritime security sector.

June 27, 2019 byEaswaran No Comments
British business magnate Richard Branson has added his voice against moves by Sri Lanka to implement the death penalty.