December 1, 2020 by Charindra No Comments 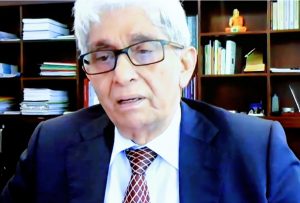 The fears expressed by international financial organisations, rating agencies and economic analysts about Sri Lanka’s debt sustainability are “unfounded”,  as the country’s debt-to-GDP (gross domestic product) ratio, if only foreign non-concessional debt is considered, is at a “more than manageable” level, according to Central Bank Governor Professor W D Lakshman.

“Several countries including Japan, Singapore, and the United States have debt levels far exceeding their GDP. Firstly, this shows that even such high levels of debt could be sustainable when domestic debt is the predominant component in the debt portfolio. It can be shown through alternative indicators that even foreign debt is more manageable than doomsayers indicate. The ratio of Government’s foreign non-concessional debt to GDP is around 23 per cent, and the remainder is either domestic debt that can be rolled over or long term concessional financing. The annual foreign debt service payments as a percentage of export earnings and remittances stand at around 12 per cent in ‘business-as-usual’ years such as 2018. With the adoption of a fiscal consolidation path from 2021 and the increased emphasis on domestic debt when it comes to financing budget deficits, the aforementioned indicators will improve further,” he said.

He made these comments addressing the Sri Lanka Economic Summit 2020 yesterday, in response to arguments that Sri Lanka’s fiscal deficits have been excessive and that its debt levels are at unmanageable levels.

The Governor also rejected calls for debt restructuring or debt reprofiling from certain quarters and that Sri Lanka must not work according to the wishes of foreign entities.

“Those who argue for so-called “debt restructuring” or “debt reprofiling” must realise that this means reforms of austerity. In my view, Sri Lanka is already undergoing some austerity, but on our terms. This is evident when the ongoing programme of import compression is considered. In my view, Sri Lanka is introducing ground-breaking reforms to improve the domestic production economy, enhance exports and reduce foreign debt dependence. It is commendable that Sri Lanka is following this approach without being prompted by any foreign agency, while continuing to honour all its financial obligations,” he said.

“Sri Lanka’s external funding needs are substantial over the medium term, and in our view, risks to the sovereign’s ability to meet its external-debt service obligations have increased. The government’s external-debt obligations amount to USD23.2 billion between 2021 and 2025 or about USD4 billion annually, against FX reserves at end-October of just USD5.9 billion. The sovereign’s financing and debt service challenges are exacerbated by its existing financing model, which has resulted in very high general government interest to revenues ratios. The average interest to revenue ratio from 2016 to 2020 is about 50%, substantially above the ‘CCC’ peer median of about 11%,” Fitch said.

It added that the Government’s plan to meet their external-debt obligations in 2021-2025 through a combination of sources, including bilateral, multilateral and commercial financing are unrealistic as access to such external financing options will become more challenging against the backdrop of already high debt levels and an expected further weakening of government debt dynamics.

“Fitch believes that financing conditions for potential market issuance have tightened materially, notwithstanding the reduction in political and policy uncertainty following the completion of parliamentary elections in August 2020 and submission of the draft 2021 budget in November,” it added.

March 31, 2019 bythemorninglk No Comments
A travel safety campaign launched by the British High Commission in Colombo targeting UK tourists has caused outrage among certain segments of the local population and faced a barrage of criticism.