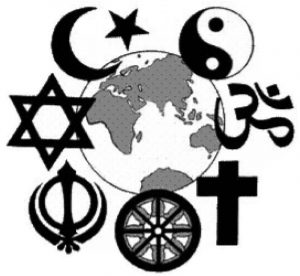 Religion is supposedly a force for good, but as any student of history will know, it has repeatedly been utilised as a tool for mindless mayhem. Religions – all religions across the world including the most peaceful ones, ergo Buddhism and Jainism founded upon the principle of ahimsa, have been utilised to whip up warfare against one another throughout our history. No need to mention most of the other religions – they all have blood on their hands too.

What I find troubling as an atheist is the undue respect given to religions in most cultures. Respect should be earned. Religious practices running roughshod over others’ fundamental rights should not be placed above reproach.

Although it has not always been so in our collective history, we are currently at a point in time where most atheists do enjoy such freedom, and take it for granted. With a few notable exceptions.

Certain strains of religions still persecute those who leave the faith – Jehovah’s Witnesses for example or Scientology in the modern day world. One of those remaining as the last bastions, carrying out active death sentences on atheists in their midst is fundamentalist Islam.

Let’s be very clear, the majority of Muslims are peaceful, both worldwide as well as right here in Sri Lanka. The miniscule minority of extremists are the problem. But while those in the majority communities outside the faith act like they are the prime targets of such extremists, they often conveniently forget, or choose to ignore, that it is actually those within the Muslim community themselves who suffer disproportionately more due to such extremists.

Many in Sri Lanka including successive government regimes (not just the current useless one) knew that peaceful Sufi Muslims were being persecuted by extremist Muslims here for decades, yet chose to look the other way; so long as the conflict remained intra-communal – most of us treated it as an intra-communal matter best left addressed from within the community.

Many atheists of Muslim origin go by a special moniker worldwide – ex-Muslims. That is, they no longer identify as Muslim, which is especially hard in countries like Sri Lanka because Muslims here don’t just belong to a religion, they belong to particular ethnic groups.

What happens if you are a Moor, Malay, or Memon and no longer identify as Muslim in Sri Lanka? The rest of the world, including the Government and outside communities, foist that identity of Muslimness upon such people, with scant regard to whether they want to be identified as such or not.

More sinister still is the fact that few are able to be open about their lack of faith. Even though the extremists are few, they pose active death threats to the ex-Muslims for daring to leave the faith – what they call apostasy, which they deem punishable by death.

It’s a moot point whether Islam advocates the death penalty for apostasy or not – scholars differ as do their religious rulings on the matter. Yet, fundamentalist Muslims across the world, including in Sri Lanka, frequently take matters into their own hands to deliver the death blow to such apostates if their governments will not.

I’ve not yet heard of any killings of apostates in Sri Lanka, but it was chilling to realise that Zahran and his team had been actively seeking to kill some open apostates, including personal friends of mine. The ex-Muslims had been aware of the threats and made active complaints to the Police, CID, and TID to no avail over the last few years. Their complaints had been ignored until the Easter attacks, after which they had been called in for questioning where the cops admitted that yes, Zahran and his team had been stalking them, trying to kill them.

Yet even so, there is precious little done to protect them still. Their lives are still in active danger, which no-one seems to be addressing as yet. Not community activists or human rights activists at large, and certainly not the Government.

The ex-Muslims are an uncomfortable minority within a minority few people want to acknowledge or give their due. And by due, I don’t mean extra-special rights; rather, the same basic human rights we all take for granted – to exist without threats to life or limb. Why is this not their due, and why do we look the other way, both intra-communally as well as inter-communally, when their lives are placed at risk? To racists, these people will always be “Muslim” no matter their faith or lack thereof. For quite a few non-racists at the other end of the spectrum, the importance of not being seen as racists trumps others’ basic human rights – this is the spurious kind from outside the community who will yell “Islamophobia” for highlighting very real issues such as these.

Ironically, they even attack ex-Muslims who critique their religion or harmful religious practices like female genital mutilation as Islamophobes too. Navigating this minefield of racists on one side and holier-than-thou non-racists on the other can be quite tricky.

I should know, I’ve been called an Islamophobe quite often. But at least the worst I’ve had to put up with is slurs. So far, no-one has sought to kill me over my highlighting of such issues.

Ex-Muslims the world over are an extremely brave lot – they brave not just ostracisation or slurs upon their characters, they face death at the hands of fundamentalist crazies in their midst too.

Many have paid the price in neighbouring India, Pakistan, Bangladesh, and the Maldives.

Yet, what do their respective governments across these countries, whether Muslim or secular, do to protect them? Absolutely nothing.

In neighbouring India, supposedly having a better handle on controlling terrorists as compared to Sri Lanka, some arrests have just been made in Tamil Nadu due to their affiliation with the Easter attackers here. One of those arrested only now, Akram Jintha, is the prime accused in the brutal 2017 killing of an ex-Muslim there – H. Farook in 2017. What was he doing out of jail all this while?

In Muslim majority countries like Bangladesh, Pakistan, and the Maldives meanwhile, ex-Muslims can be actively imprisoned on charges of blasphemy and even dealt the death penalty.

In countries like Saudi Arabia and Iran, the crackdown is much, much harsher, with atheists being denigrated “terrorists”, with attendant capital punishment to suit. The world is not an easy place to be an atheist from the Muslim community, whether in Muslim majority countries or not. Secular rules do not seem to apply to them, even in secular countries.

Freedom for religion is well understood. It’s the concept of freedom from religion which remains a problem. Thousands of atheists and secularists have died down the ages for freedom from the oppressive yoke of religion. This too is a fundamental human right.

It is to be noted however, while atheists were being persecuted in Europe in the middle ages, they thrived in the Middle East during the Golden Age of Islam.

Geopolitical forces from so-called “developed countries” developed virulent strains of Islam for their own nefarious purposes – and the Muslim community worldwide is suffering for it first, before the spillover into other communities next. Women, children, atheists, agnostics, and moderates are suffering alike from within the community – this article is not about targeting the Muslim community by implication.

It’s a call to our Government to do right by the persecuted peoples within the faith instead of utilising communal conflict as a tool for further disharmony. It will most likely fall on deaf ears, but the rest of us need to wake up.

Not in our name. Not in their name either. It’s on Zahran and co.’s names. Also, definitely in the CIA’s name. And likely the CID’s too.

(Thulasi Muttulingam is a freelance journalist based in Jaffna. All views expressed are her own and not of any organisations affiliated to her)

December 2, 2018 bythemorninglk No Comments
The potpourri of political events that took place last week ended once again without any solution being reached on resolving the current political stalemate.