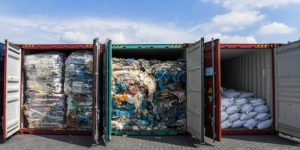 Sri Lanka is preparing to send the containers of waste exported to Sri Lanka by a UK company, back to its country of origin in the UK from October onwards, once the legal process is completed, the Central Environmental Authority (CEA) revealed.

An official from the CEA Waste Management Division, speaking to The Sunday Morning, said: “The British company is ready to take back the garbage containers. But the shipping restrictions that were imposed due to Covid-19 caused a hindrance to it.”

The UK’s Environment Agency in July agreed to accept the controversial waste containers exported to Sri Lanka by a UK company. The case was taken up on 23 July, during which time the Attorney General’s (AG) Department of Sri Lanka had informed the Court of Appeal of Sri Lanka that the UK Government was in the process of conducting an inquiry on the British company that exported waste material in freight containers to Sri Lanka, violating the UK’s environment and health regulations.

In January this year, the CEA proposed alternative options, including securing the services of a foreign consultancy firm with adequate technical knowledge to expedite the process of investigating into the containers of imported garbage from the UK found at the Colombo Port in 2019. In 2019, Sri Lanka Customs and the CEA found that some private parties had imported around 240 container loads of waste to the country without the approval of the CEA, breaching the provisions of the Basel Convention.

It was later revealed that the waste consignments were imported from the UK and had been lying at the Colombo International Container Terminals (CICT) and the Katunayake Free Trade Zone (FTZ) since 2017. The Centre for Environmental Justice (CEJ) filed a writ of certiorari and mandamus in the Court of Appeal, naming the CEA, Sri Lanka Customs, and the AG’s Department as respondents of the case, which ordered the CEA and Customs to conduct an investigation into the illegal importation of container loads of waste at the Colombo Port and Katunayake FTZ.

December 27, 2019 byTSM Web Desk No Comments
Former Minister Rajitha Senaratne, who is currently receiving treatment at Lanka Hospitals in Narahenpita, has been remanded by the Colombo Additional Magistrate until December 30.